I watched NBC’s Commander in Chief Forum last night. It was even worse than I expected: Matt Lauer treated Clinton like a hostile witness, Trump like a celebrity. I guess that’s what they mean when they say the media grades Trump on the curve: celebrities aren’t expected to know much, and it’s somehow unfair to call them out the same way you’d call out a politician.

Where to even start with Trump? Three months ago he complained about Japan not paying enough for American military protection and not having a bigger military of its own. Why, you’d almost think he’d missed history class the day the teacher explained that as part of Japan’s surrender in 1945 it agreed to pay for building and maintaining American bases on its soil (which it does to this day) and to have only a token self-defense military of its own, too small to threaten its neighbors. But Trump’s lack of knowledge about our military relationship with Japan didn’t seem to bother anyone else; god knows his other displays of ignorance are so magnificent this one seems trivial in comparison.

I’ll tell you where I start … and end … with Trump: 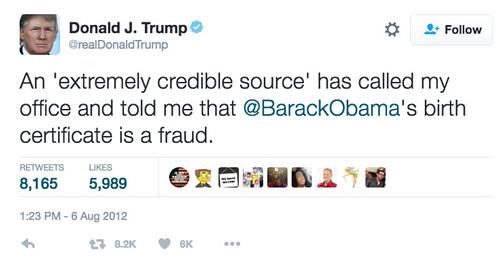 He’s a birther. What else do you need to know?

There probably isn’t a Facebook or Twitter user out there who hasn’t unfriended or blocked some obnoxious asshole or another. So far the only ones I’ve blocked have been birthers. I messaged each of them before pulling the plug, telling them I couldn’t be friends with racists. Each of them responded with a variation of this: “I’m not a racist, I just have legitimate concerns about Obama’s citizenship.” Sorry, you’re a racist and we’re done. And I have always been done with Trump.

Are the debates, if Trump doesn’t make up some excuse to weasel out of them, going to be a repeat of what we saw on NBC last night? One of the scheduled moderators, Fox News anchor Chris Wallace, has already lowered the bar by saying it’s “not my job” to challenge what candidates say during the debates. If I thought for a minute that meant not challenging anything either candidate says, I might take heart that the moderators will at least be even-handed. But you watch: they’ll challenge and fact-check Clinton on almost everything she says … not-challenging will apply only to Trump.

Trump won’t talk about his birtherism. Journalists and reporters have decided to go along with that. When’s the last time you heard any of them ask Trump about it, to his face? Prediction: if Clinton brings it up during the debates, the moderators will try to shush her. And then they’ll ask about her emails.

Tell you what, if I were Hillary I’d seriously consider not answering any more email questions. I’d say what Trump says about his birtherism: I don’t talk about that. See how far that gets me. What the fuck, the media’s in the tank for Trump anyway.

It’s all down to voters, particularly those of us who won’t let the media pull the wool over our eyes. Let’s pray there are enough of us.

One thought on “Celebrity Gets Tongue-Bath, Big Surprise”