And Her Little Dog Too 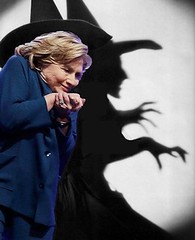 My Facebook and Twitter feeds are currently dominated by Bernie Sanders supporters, which would be fine except that over the past couple of months being pro-Sanders has morphed into hatred of Hillary Clinton. Yesterday two different friends linked to an anti-Clinton article ludicrously stating that her policies have harmed women, arguing that voters should therefore support Bernie (who, to my knowledge, has never done a single thing for women, unlike Hillary, who has fought for equal pay and an end to gender discrimination her entire political career). Today another friend posted a video accusing Hillary of freeing a child rapist and then laughing about it.

What’s next? Just ask Donald Trump, because my pro-Sanders friends might as well be taking their anti-Clinton marching orders directly from him. Their attacks on Clinton echo those coming from Fox News, the National Enquirer, the Drudge Report, and the RWNJ (right wing nut job) talk radio fever swamps: Trump’s go-to sources.

Of course one gets a very distorted picture of the campaign from social media (or mainstream media, for that matter). Clinton is still miles ahead of Sanders and barring miracles will be the Democratic nominee. Sanders is not, as his supporters keep insisting, the only candidate with a chance of defeating Trump; I suspect that if it came to it Trump would easily defeat Sanders, who hasn’t been seriously attacked from the right because the right is concentrating its attacks on Clinton. And why is the right concentrating on Clinton? Because she’s the serious threat, the candidate most likely to win.

The old attacks on Hillary … she’s a lesbian, she killed Vince Foster, she laughed about getting a child rapist off the hook … have all been debunked. The new round of attacks … she’s somehow responsible for the loss of American lives in Benghazi, she did something criminal with her email account … come from the same crowd who pushed the old attacks, and have been convincingly debunked as well.

In the past Hillary stood up to these attacks like the seasoned politician she is, but her attackers were all on the right, contemptible scumbags each and every one, easy to refute. Now she’s being subjected to the same attacks from the left, by people who should be her natural supporters and friends. How will this affect her, and how will it affect uncommitted voters’ opinions of her? I can’t help feeling it’s going to harm her chances. To what degree I can’t tell, but I worry about it.

Mainstream media reporters could help with factual reporting and fact-checking, but they aren’t. And they won’t. Breathlessly implying some great scandal is about to break or that the horserace is neck-and-neck gets viewers and readers. Viewers and readers get ratings. Ratings get advertising money. 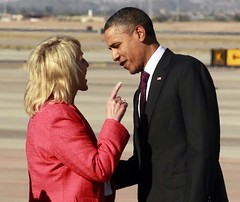 When I came upon the Hillary Clinton/Wicked Witch image I used at the top of this post, it reminded me of this actual photograph of a witch-like Arizona Governor Jan Brewer lecturing President Barack Obama on the tarmac of an airport in Phoenix, an iconic image indeed: “the finger point seen ’round the world.”

I hated Jan Brewer. Not just because she was Republican, but because she kept repeating lies about illegal immigrants beheading Arizonans on the border, even after her allegations were shown to be lies. Also because word on the street was she was a drunk. I hated her for trying to undermine the president, but I didn’t hate her for wagging a finger in his face … on the contrary, I’m glad I’m not a Turk or a Russian, that I live in a country where we can criticize our leaders.

This will not long remain the case if Trump manages to get himself elected.

Well, after all that I need some escapist reading. You probably do, too:

One thought on “And Her Little Dog Too”