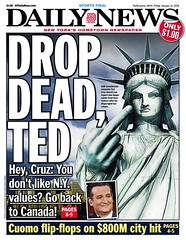 When self-styled heartland conservatives disparage New York City, what they’re really trying to say is “There be Jews.” It must have killed them to pretend to love NYC after 9/11. Well, time has passed, and it’s safe now for them to go back their old ways.

I’m just as worried about the Democrats, but for a different reason: that Bernie’s supporters will stay home on election day if Hillary gets the nomination, or vice versa. If that happens, the candidate with the most negative message will get all the media attention … hell, just look at all the free coverage Donald Trump is getting and tell me that’s not already happening … and that candidate just might win.

I don’t want to lose perspective. Comedian John Oliver said, back in August, “There will be actual babies born on election day 2016 whose parents haven’t even met yet.” Well, it’s the 15th of January 2016 now, and there’s still plenty of time for boys and girls to meet, date, couple, and spawn before the election. Note to self: take a deep breath. At this point, all possibilities remain open.

Americans will never forgive Iranians for taking our countrymen hostage in 1979 and holding them for 444 days. We’ll never trust Iran. Nor will Iranians forgive or trust the USA for deposing their democratically-elected president in 1953 and putting the shah in power. But Iran and the USA are slowly learning to have diplomatic relations again, and the nuclear deal we’ve negotiated with that country, meant to keep it from developing nuclear weapons and destabilizing the Middle East, is a huge accomplishment.

So it was a shock to learn, minutes before President Obama’s last State of the Union address, that Iran was holding 10 American sailors who had drifted into Iranian waters. Even Obama’s most fervent supporters had to wonder it this meant his efforts to negotiate that nuclear deal with Iran was a failure.

The advice I gave myself earlier? Take a deep breath? Yeah, I took that advice, and I’m glad I did, because it quickly emerged that the situation with our sailors and Iran was no biggie. We’d have done the same to them, had Iranian sailors drifted into American waters. Any country would have done the same to any other country’s sailors. Our men and women, along with their boats, were safely returned less than a day later, and you’d have thought that’d be the last of it.

Not with Fox News on the job, it wasn’t. Here’s a link for you: Fox News Pundits Shit the Bed More than Usual Over Iran’s Detaining of US Sailors. After that headline, an article expanding on it seems superfluous, but actually it’s a very good, balanced article, and I hope you’ll click through and read it. Really, it says everything I might have said, and raises some points I hadn’t thought of.

So why are these Fox News pundits trying so hard to turn this non-event into a crisis? Well, it’s another opportunity to snipe at Obama, but more to the point, it’s a manifestation of the hatred and distrust I mentioned four paragraphs back, that lasting anger over the Iranian hostage crisis. We will never forgive, nor, I suppose, should we … but we need to remind ourselves that our hands aren’t clean either, and we can’t let acrimony get in the way of making the world a safer place.

Back to more proximate things. Our daughter Polly finally got work, a full-time job managing the office of a used car dealership. If the “used car” part of that puts you off, know that it put us off too, and sadly, our misgivings were justified.

Sure as hell, Polly rolled her sleeves up and in three days straightened out months of backed-up sales records and car titles. As soon as she had the office whipped into shape the dealer let her go. No doubt he’ll hire another sucker down the road, once the paperwork backs up again.

Polly has been surprisingly resilient through all this. Sure, she gets discouraged, but she keeps looking for work, and when she gets interviews she always puts on an optimistic face. I’d be a basket case if I were in her shoes. Still, it’s a trial for all of us, and it’s hard to be patient. We’re trying, and I’m trying extra hard. Keep those fingers and toes crossed for her, okay?

In the meantime, after three weeks on Craigslist, Polly’s Ducati found a new owner and now she has a bit of a bankroll for the time when she gets a good job and wants to move into an apartment of her own. I have to say I’m relieved. I worried every day she owned that motorcycle, even when she wasn’t riding it. What a hypocrite, huh? Well, you have a daughter some day, and we’ll compare notes.

Speaking of motorcycles, here’s another short GoPro video clip from the New Year’s Eve ride. My son Gregory’s in the lead on my Goldwing and I’m in trail on a rented Harley. We’re pulling into the small mining town of Kearney, up in the hills east of Phoenix, and parking next to an old steam tug for a photo op. 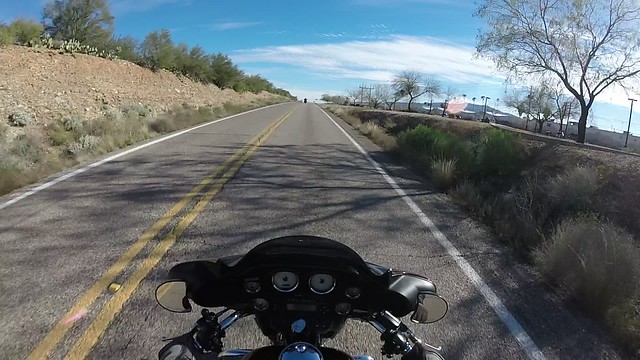 And here’s one of the photos we took, using a tripod and remote clicker: 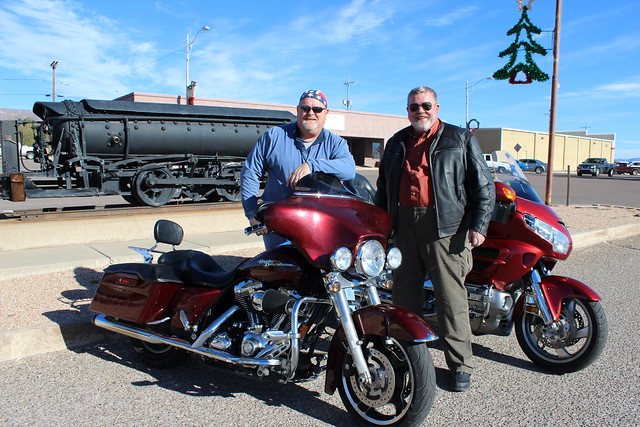 The ride is a pleasant memory now, and I’m looking forward to the next opportunity to ride with my son. Before then, I hope to go on a solo ride to New Mexico and the mountains of southwestern Colorado, probably in the spring. And yes, I’ll bring the GoPro!