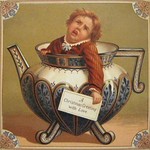 I posted this vintage Christmas card to Facebook to amuse my friends. The kid’s woeful expression prompted a few comments. Really, though, if you study 19th and early 20th century portraits, photos, and illustrations, unsmiling faces were the rule rather than the exception. People always looked somber. I started to wonder why that was.

Well, for one thing, you had to hold still, not just for an instant but for a second or two, in the early days of photography; longer yet if you were modeling for a drawing or painting. How hard it is to hold a smile or grin? Pretty hard, unless you’re The Joker. And then there were the teeth. Before modern dentistry, nearly everyone had bad teeth, and people with bad teeth tend to keep them hidden. These seemed the likeliest explanations to me.

Then I read this, a Washington Post article titled “Why people used to look so serious in photos but now have big smiles.” Turns out we’ve been taught to smile when being photographed, and to expect to see smiling people in photos, by the same people who taught us to worry about bad breath and B.O.

But to smile for the camera, to mug and pose, is strictly a learned habit. Historians say that the photographic grin not only a recent ritual, but also a somewhat artificial one: abetted by the camera industry, and entwined with the rise of cheerfulness as an American cultural norm.

This part rather got under my skin:

Though photography was still relatively new in the 1850s, portraiture was not, and tradition said that proper people should not grin or bare their teeth in their pictures. Big smiles were considered silly, childish, or downright wicked.

“In the fine arts a grin was only characteristic of peasants, drunkards, children, and halfwits, suggesting low class or some other deficiency,” Kotchemidova writes, citing research from historian Fred Schroeder.

Curious, too, that Jeff Guo, the Washington Post reporter, wrote his article right about the time I posted that vintage Christmas card to Facebook. Maybe I’ve a wider circle of readers than I thought.

This week, and specifically December 17th, marked the 112th anniversary of the Wright Brothers’ first flight. The 17th was also the 80th anniversary of the Douglas DC-3. I wonder if Donald Douglas intentionally chose that day for the new airliner’s first flight … he had to have, no? By the way, the first production DC-3s were actually DSTs (Douglas Sleeper Transports) … the DC-3 (DC=Douglas Commercial), the version without sleeper berths, came a little later.

A little additional research: the first flight of the Boeing B-47 Stratojet was December 17, 1947. The first powered flight of SpaceShipOne was on the same day in 2003. Gotta love Wikipedia, amirite?

Got an email from Sirius/XM, offering me a free two-month trial. The one-year-old GMC truck we bought came with it originally, and I’m sure they’d love to sell me a new subscription. All I had to do to accept the free trial was to go online and ask Sirius to send an activation signal to my truck. Normally I’d don my hair shirt and say no, not gonna take a free sample of something I’m not gonna buy, but hey, it’s Christmas, so what the hell.

As before (I had a Sirius subscription several years ago, before it merged with XM), I quickly zeroed in on five of the 140 or so channels they offer: classic vinyl rock, real (not “lite”) jazz, big band swing, classical, and opera. It’s pretty sweet, although there’s no easy way to go from channel 26 (classic vinyl) to 74 (swing bands): the truck radio doesn’t let you earmark favorite Sirius/XM channels, as it does favorite FM stations, so you have to call up a complicated menu and touch tiny numbers on a screen, not something you want to be doing while driving.

Pandora, where you set up your own stations, is far more flexible in terms of finding the music you like (I have a Manhattan Transfer station, for example, and one for space music), and if you have a newish vehicle with Bluetooth you can install Pandora on a smart phone and run it through your car radio. Changing stations while driving, however, is even more dangerous: you have to punch in menu commands on your tiny-ass cell phone screen. I wonder if tech companies are working on voice-activated commands for Sirius/XM and Pandora automotive applications. They need to be.

Every now and then a speeding car will crash into an overpass abutment, killing everyone inside. With no first-hand witnesses, it’s anyone’s guess what happened. Could have been a wasp. Or a spider. A burning cigarette accidentally dropped in the driver’s crotch. Trying to change Pandora stations on an iPhone.

Speaking of not smiling, I scolded a lady for spamming Facebook with discount Ray-Ban ads. She wasn’t a Facebook friend (and she for sure will never be now), but she spammed a friend with it and as a result it showed up in my news feed. Ray-Ban spam makes me see red, so I used strong language. “But my account was hacked,” she said. Of course she’d say that. That’s what they all say. Bullshit. She clicked on something.

Two days later? More Ray-Ban spam in my news feed. Another friend of a friend.