Yesterday Polly and I visited our friend Ed’s garage to do some cosmetic work on the Ducati.

Ed, as regular readers know, is not only a friend but my motorcycle maintenance guru. With his help, we put on new clutch & brake levers, bar end mirrors, and front turn signals. The bike’s still a little rough, but there must be someone out there lusting after a Ducati, so we’ll put it on Craigslist and see if we can find a buyer. If not, it can sit in my garage for awhile.

I put a deposit on a rental Harley this morning. Our son and his family are driving down from Las Vegas to spend the week after Christmas with us, and Greg and I want to go riding one day that week. We settled on Thursday, New Year’s Eve. We’ll pick the rental up that morning and drop it off the morning of New Year’s Day. Our planned ride, weather permitting, will be an out & back to Globe, Arizona, an old mining town in the hills east of Phoenix. While we’re gone, Donna and Polly plan to take our daughter in law Beth and grandson Quentin to the Desert Museum. 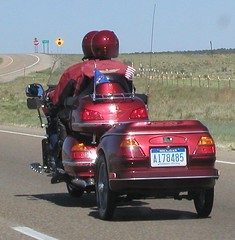 I resisted the idea of pulling a trailer with the Wing for 15 years, because how old-mannish can you get, etc, but up to now all my cross-country trips have been solo and everything I need fits on the bike.

Now, though, we’re looking at using the big trailer, the one we pull behind the truck, to take us and the Goldwing from Tucson to good riding country a few hundred miles away, then hopping on the Wing for two- and three-day rides in New Mexico, Utah, Colorado, and California. Riding two up, there’s no way we can cram all our stuff in the saddlebags, and suddenly a little tag-along trailer makes sense.

I’ll be relieved when the Ducati is gone. Giving it to Polly wasn’t a mistake, at least in the sense that she didn’t kill herself on it, but the potential has always been there, and I’ve been living under a cloud of “what was I thinking” self-doubt from the day I signed the title over to her. It hasn’t helped that she’s carelessly dropped the thing on its side several times (mostly in her own driveway, thank goodness), beating it up in the process. She has our old Lincoln now, so it’s not like she needs wheels, and if we do manage to find a buyer, she can use the money to get set up in a place of her own. Once she finds a job, that is.

Ah, the joys of having an adult child living under the same roof. But that’s a rant for another day.