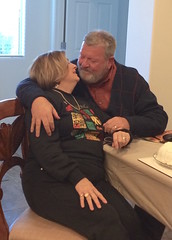 I was told again and again, but kept forgetting. Before Donna even got out of bed Sunday morning I was in the kitchen starting a big pot of chili. By the time she emerged, it was too late to stop: the beans and meat were in the pot, bubbling away. She shook her head and explained once more that we had a dinner date that afternoon with our friends David & Marie, and that the chili would have to wait till Monday.

Do you know how hard it is to smell chili cooking and then be told you can’t have any until tomorrow? I consoled myself with the thought that chili only gets better with time. Well, today is that tomorrow: we’ll soon find out if chili really does benefit from 24 hours in the fridge.

But back to the dinner at David and Marie’s house: when we walked in the front door, a dozen of our closest Tucson friends came spilling out of the bedroom where they’d been hiding, shouting “Surprise!” and “Happy anniversary!” Somehow word had gotten out we hit the 50-year mark this Wednesday, and our friends threw us a party.

From time to time we think about moving back to Las Vegas, maybe even trying someplace new like Reno or Bend, and then we think of the friends we’ve made over the years in Tucson and realize this is our home now and forever. Growing up, neither of us lived any one place longer than three years. Once we married, it was the same: Germany, California, Montana, Oklahoma, the Netherlands, Alaska, Virginia, Florida, Okinawa, Hawaii, Nevada. Then, in 1997, we came to Arizona. We’ve been in Tucson 18 years now. This is where our friends are and this is our home. 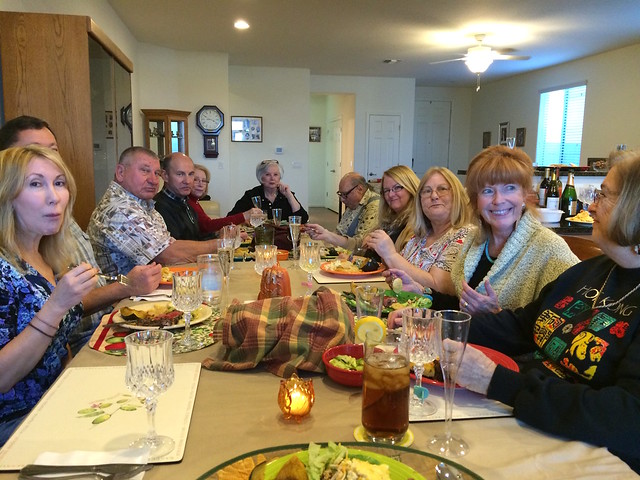 Someone asked us last night if, when we were younger, we ever thought we’d still be together 50 years later. We kind of stumbled over that one. I don’t think either of us ever thought about stuff like that. I know I never did. I remember, when I was 8 or 9, learning about Halley’s Comet and how its next appearance would be in 1986. I figured out I’d be 40 years old then. I couldn’t conceive of being that old! Hell, my mom and dad were barely in their 30s at the time. My grandparents were in their 50s, and they were ancient!

We were 19 when we married. We were still 19 when we had our first child; 28 when we had our second. When we were 40 we drove out far out of the city of Norfolk into the dark Virginia countryside to look at Halley’s Comet. We were 51 when we came to Tucson. Now we’re 69 and about to celebrate 50 years together.

One thought on “A Surprise Party”