Gosh, how long’s it been since I last suggested cops should stop tasing, beating, and killing people for no reason? Feels like months. Actually it’s been weeks, which is a long time for me. It’s not that I’ve given up; it’s more like everyone knows what I think anyway, and nothing I say is going to change the hearts of those who cheer the cops on no matter what they do.

I’m with Hillary Clinton. As she said to Black Lives Matter activists in August, “Look, I don’t believe you change hearts.” She went on to say (I’m paraphrasing) here’s what you can change: laws, policies and procedures, rewards and punishments. And what you wind up changing, over time, is behavior. That’s as good as we’re ever going to be able to do, and that’s okay, because it’s behavior that counts. I’ve been saying this for years. It’s what I saw the military do after Vietnam. And it works. We don’t know what people have in their hearts, but we can change their behavior, and as a highly diverse but integrated collection of people with an important mission to perform, the military works pretty well.

Can law enforcement follow that path? Yes, and at many levels it is trying, but unlike the military, there’s no central authority. Look at this mess in Marksville, Louisiana, where city marshals—who normally serve court papers but who have recently taken to acting as traffic police in spite of the fact that Marksville already has a police department—fired multiple shots at an unarmed man in a car they’d stopped, critically wounding the man and killing his six-year-old son. The Marksville city marshal, it has emerged, has no law enforcement background: a former school bus driver, he was elected to his current position. Louisiana state police appear to have no power over his maverick local fiefdom.

Multiply the local fiefdom scenario by the number of villages, towns, and cities in the USA, and it’s a wonder any sort of standards exist at all. Changing law enforcement policies and procedures to discourage thuggish behavior and reward good policing might be impossible on a national level, since no one person or agency has the power to do that. But we have to keep trying, and videotaping encounters with the police seems to be making some difference. Voting for politicians who understand the difference between changing hearts and changing behavior should help too, and that’s what I intend to do.

Enough of that. Please.

Last week my friend Ed and I put a belly pan on my motorcycle. That, along with modifications I had made to our new trailer, should mean the Goldwing can get on and off it without scraping bottom. It did at the trailer dealer’s lot and it should work at home as well. But first use of the new trailer goes to our daughter Polly and her Ducati, which we rolled up the ramp earlier today. It’s on the trailer because we can’t get it running and I’m taking it to Ed’s to see if we can figure out why. Once we get it running again, I’ll trailer it home and advertise it on Craigslist.

I never get tired of sharing motorcycle photos, so here are two:

Did I mention it’s breezy and cool? The weather could not be more lovely. I’m looking forward to the Death Valley ride later this week.

Donna and Polly gave me a selfie stick for my birthday. Yesterday I took it to the Pima Air & Space Museum, along with two cameras and a full-scale tripod. One camera was the one in my iPhone, the other was a Canon DSLR.

I thought there was to be a classic car meet on the museum grounds, but I’d misread the announcement. The meet was for restored military vehicles, not classic cars, and as it turned out there were only a few military vehicles on display: a deuce-and-a-half, two Jeeps, and a new Ural pretending to be an old BMW. I wound up taking a bunch of selfies instead, alternating between the DSLR on the tripod and the iPhone on the stick. Honestly, I have a hard time telling the difference in quality, but you can tell the DSLR/tripod photos because they’re taken from farther away.

The old MATS C-54 in the second photo? It flew in the Berlin Airlift in 1948 and 1949. People who’ve been in it say you can still smell dried corn and grain. If a machine can be a hero, this one qualifies.

One more photo, from last Sunday’s Cyclovia ride in Tucson. Adding it to this blog post because otherwise I’m likely to forget to share it with you. 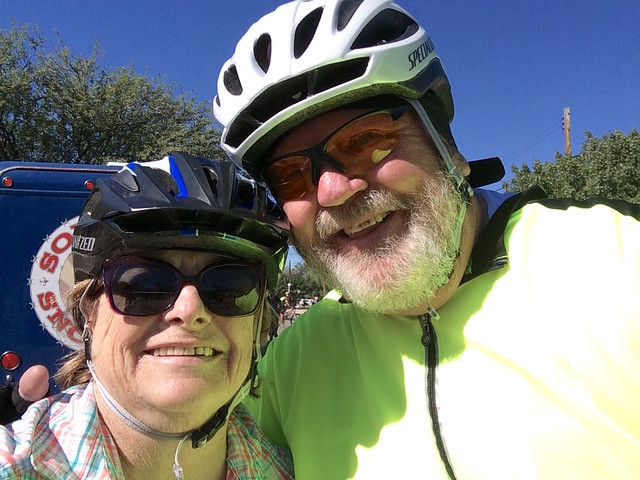 Honestly, do we look like our 50th wedding anniversary is less than a month away? Damn, where does the time go?