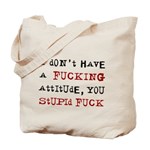 I remember the last time a cop pulled me over for a chickenshit offense. He’d set me up by matching speeds and driving line abreast in the lane to my right, then suddenly slamming on his brakes for a pedestrian I couldn’t see because the cop was blocking my view. I rolled on, and as soon as the pedestrian stepped back onto the curb the cop hit the lights, ran me down, and gave me a ticket. I was angry and didn’t hide it. Later on, when I looked at the ticket, I saw the words “VERY bad attitude!” written at the bottom.

Like my attitude was any of his business. I contested the ticket because of the cop’s remark, but didn’t get anywhere with that. People looked at me like I had two heads. Really? Am I the only person who doesn’t think we’re supposed to bow & scrape when a cop pulls us over for some bullshit deal?

I haven’t said anything about Sandra Bland because from the get-go I feared it would turn out she really did commit suicide in her jail cell, and now it’s starting to look as if she might have. But the chain of events that led to her death started with the cop who set her up for a bogus traffic stop, and as far as I’m concerned it’s all on him.

Sandra Bland was driving down the road, doing nothing wrong. The cop passed her in the opposite direction, flipped a U-turn and aggressively muscled right up behind her, then flashed her and pulled her over when she moved to the right to let him by. Damn right she had an attitude. I sure as hell would’ve, and so would you. When did that become a crime?

Something’s gone way wrong with police professionalism. Maybe it was never there in the first place. It’s certainly not there now. They treat us all as perps, white and brown and black alike, and expect us to grovel. Of course we’re a hell of a lot more likely to be beaten or tased if we’re black or brown, but plenty of white motorists get the treatment as well.

Keep that smart phone handy, peeps. Video every encounter you have with the police, and if you see someone else being roughed up by a cop, pull over and tape it. These taped encounters are making a difference. They’re going viral, popping up on the six o’clock news, and making people think.

Ten, fifteen years ago, most people would react to stories about cops beating people up during traffic stops with a shrug. They’d say that’s what you get for showing an attitude. Today not so much. More and more of us are saying bullshit, the cops are the problem, not our attitudes. We owe this sea change to smart phones.