Following up on yesterday’s post: the vet said Schatzi was back on her feet and ready to go home, so I picked her up from the animal hospital. She walked from the hospital door to the car, but she’s still wobbly on her hind legs and had to sit down a couple of times. When I got her home, Maxie the auxiliary dog came running to welcome her back and has been solicitous of her ever since … she knows her friend’s been through the wringer. Of course the condition of Schatzi’s post-operative back is a dead giveaway: 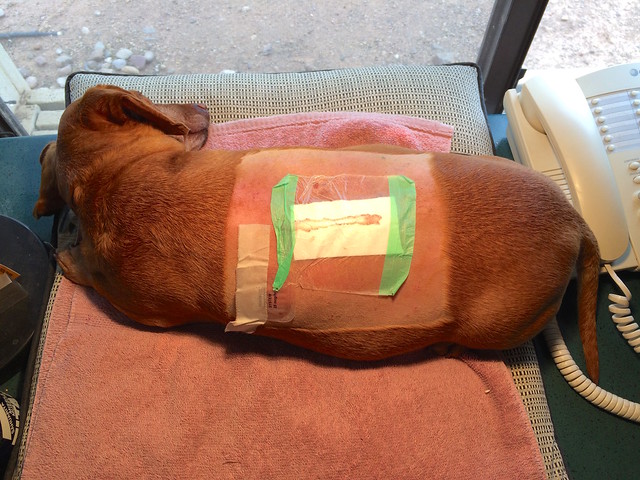 The poor girl may as well have been stepped on by a horse, and she’s suffering. She moans and groans and cries, but we have faith she’ll recover. The vet has done hundreds of these operations. We’ve been carrying Schatzi to the back yard to do her business, but otherwise keeping her close by and letting her rest, as she’s doing now next to me on her computer desk pillow.

Actually, we shouldn’t be carrying her at all. She needs to work those back legs. We’ll just have to harden our hearts. That won’t be easy for us, or for Schatzi.

The smaller dressing on her back covers a pain medication patch. The medication (or maybe her body’s natural reaction to invasive surgery) makes her bloated; we’re giving her anti-inflammatory pills twice a day to counteract that. The pain patch comes off tomorrow. She’ll keep taking the anti-inflammatories until they’re gone, and two weeks from now go back to have the sutures removed.

Meanwhile, we watch over her and hold her and let her know we love her.

This past weekend, long-time investigative journalist Seymour Hersh (the reporter who in 1969 exposed the My Lai massacre) published a long, fascinating article in the London Review of Books. Its subject is the killing of Osama bin Laden, and it undermines most of the official story (except for the most important part … the part where we found and killed bin Laden).

Backlash to Hersh’s story has been immediate and ongoing, most of it based on his apparent reliance on a single informant who cannot be named, some based on the fact that Hersh published his article in the LRB rather than The New Yorker, for whom he normally writes. Some say he’s fallen for a conspiracy story.

I’m not joining the backlash chorus, at least for now. One, Hersh has consistently gotten the goods over the years, and unless he’s suddenly gone soft in the head (as some hint), there’s no reason to think he’s suddenly writing unfounded trash. Two, others have previously reported some of what Hersh says about the bin Laden killing. Three, The New Yorker famously fact checks everything it publishes, which would explain why this article came out in another publication … anonymous source stories are by definition not fact-checkable. Four, the official story has always been full of holes (especially the bit about the burial at sea). Best to wait and see what comes out in the wash.

No matter what, though, Osama’s dead and Obama got him. That’s the important part, and the haters will just have to keep sucking that bitter lollypop.

Donna and I will be in Silver City, New Mexico, from Wednesday through Saturday. Our niece Rebecca graduates from Western New Mexico University on Friday with a master’s degree in social work. Polly is driving in from Ajo today to house- and pet-sit while we’re away, and I know she’ll be all over Schatzi. Donna’s sister Georgianna is flying in from Detroit for a few weeks … she gets in Friday and will keep Polly and the critters company until we’re back from New Mexico.

After Rebecca’s graduation there’ll be no more traveling for me until late August, when we’re doing an old-fashioned car trip to northern California, Oregon, and Nevada (cue theme from National Lampoon’s Vacation). Donna, I think, has a sewing convention and trade show in southern California in July, but I’ll be home. Saving money. Donna, if I haven’t mentioned it before, retires for good in another week or two. She’ll be home full time, trying to make more of a go of her embroidery business.

Imagine that, the two of us home together. Every. Goddamn. Day. Now there’s a lollypop for you.

What, you don’t believe me?

Well, I just learned there’s nothing wrong with Schatzi’s farter. I’ll take that as a hint, wrap this up, and take her out back. Please keep our little doggie in your thoughts, okay?