“Hell is the absence of the people you long for.” — Emily St. John Mandel, Station Eleven 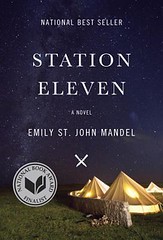 There are so many post-apocalyptic science fiction novels, but few are this well executed. Station Eleven is on a level with A Canticle for Leibowitz and Margaret Atwood’s Maddaddam trilogy.

Set in a near future where most of humanity has been eradicated by a nightmare flu, the cities ruined and abandoned, the novel follows a small cast of survivors, all somehow related to, or touched by, a Canadian/American actor who died on stage just as the flu reached American shores. The narrative shifts between the present and the past, allowing the reader to gain a fuller understanding of things Emily Mandel hints at earlier in the novel, and this makes for a very satisfying experience.

Often, when an author shifts the narrative from one character to another, or from the present to different times in the past, there are sections I read with less pleasure than others. That is not the case here: I hung on every word, every character, every aspect of the past and present. Every character is fully developed, man and woman alike, fully relatable. If you do not fall in love with Kirsten there is something deeply wrong with you.

Is there a villain, beyond the Georgia flu? Why, yes there is, and the tension he generates will have you squirming in your easy chair: I speak, of course, of The Prophet. But here I go with plots; I’ll force myself to stop.

I especially love books where the author ties things together. William Gibson is great at this; so is Emily Mandel. Every time Mandel explained the back story behind something she’d hinted at before — the paperweight, the limited edition comic book, the tattoos — I felt like the kid who finds the chocolate bunny hidden among the regular Easter eggs.

I loved this book. 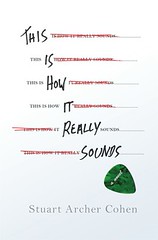 This Is How It Really Sounds
by Stuart Archer Cohen

I read Stuart Archer Cohen’s The Army of the Republic a few years ago and was tremendously impressed, so when St. Martin’s Press offered me a pre-publication copy of his newest novel (set to release on April 21, 2015) in exchange for a review I was happy to accept.

Looking over my review of the earlier novel, I see I took special notice of how, as the story unfolded, Cohen tied the lives and actions of three quite different characters together. Cohen has a gift for this sort of thing and it’s on full display in This Is How It Really Sounds. Here, the three characters are men with similar names: Harry Harrington, an extreme skier; Pete Harrington, a rock star; and Peter Harrington, a Wall Street hedge fund billionaire. The relationship between the skier and the rock star is clear from the beginning; the connection between the hedge fund billionaire and the rock star becomes clear a few chapters in; later we learn of a tie between the skier and the hedge fund guy; later still … well, I’ll just say the novel’s conclusion goes in a direction I did not anticipate, one both profound and sublime, reminding me a bit of David Mitchell, the king of intertwined lives, and his masterpiece Cloud Atlas.

As with Cloud Atlas — and Cohen’s own The Army of the Republic — the stories of the individual characters and the events that bring them together are damned interesting, tense and suspenseful in many cases, all full of convincing detail. The characters, too, not just the three Harringtons but the men and women who play supporting roles, are intensely relatable (even the hedge fund asshole, whom we have every reason to hate yet come to like).

A theme repeats itself throughout the novel: a yearning for a simpler life, close to the land, enfolded within the love of a tight-knit family. A character will glimpse an isolated house: a farmhouse in a Pennsylvania field, a Chinese home of enclosed gardens in a quiet Shanghai neighborhood, a Swiss chalet in a mountain meadow, a mountain cabin in Alaska. The character will long for the life the house seems to promise. The character will feel the urge to approach the house and knock on the door. The character, eventually, will.

I found all this quite moving and finished this remarkable book on a high. I should explain that a 4.5 star rating is about as high as I go on the Goodreads scale. Call my star ratings idiosyncratic; I reserve 5 stars for the messiah of books. This one comes close.

Note: the e-version I was sent, which I converted to the Kindle file format with NetGalley, was formatted correctly and almost typo-free: the exception was a superfluous three-letter word, “lai,” randomly inserted into sentences here and there. I quickly learned to ignore it and it didn’t affect my enjoyment of the book. 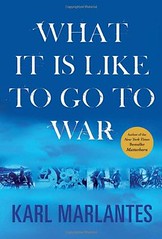 What It is Like to Go to War
Karl Marlantes

A treatise on how soldiers act and feel during and after combat, covering territory familiar to anyone who studies war. Marlantes, however, pushes further, looking for ways to prepare young soldiers for the mental burdens of killing and seeing friends killed. He focuses on philosophy and spirituality, veering toward religion and a sort of God Is on Our Side/Submit to Authority prescription I could not swallow. This made great parts of the book hard reading, at least for me.

I picked this book up on the recommendation of a USAF friend I once flew with. We have both written about aerial warfare and the killing of innocent victims, whether through bombing or drone strikes, and frankly are looking for ways to justify what we did for our country. I didn’t find much help here, for the reason stated above.

But boy can Marlantes write! His examples, drawn from his combat experience in Vietnam, are riveting. I now want to read his fictional accounting of fighting in Vietnam, Matterhorn. 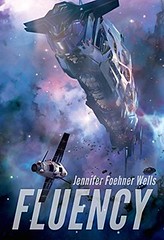 Except for the warm & fuzzy humanistic woo the alien ship’s navigator pitches to Dr. Jane Halloway, I thought this was a pretty solid science fiction novel. I particularly liked the strong, independent female characters, Varma and Jane, though I question whether NASA would ever contemplate putting a tag-along linguist in command of a first contact mission. To my more realistic mind, Walsh would be the commander no matter what sort of alien encounter might happen on the mysterious ship in the asteroid belt, and at least Jennifer Foehner Wells had the good sense to recognize this: although Jane Halloway was nominally in charge once contact with the alien was established, Walsh opposed her every step of the way.

The aforementioned woo may turn a lot of long-time science fiction readers off, and some may consider Wells’ first contact narrative too timid: in Fluency, the alien civilization we encounter is not all that different from what we’re used to. But the novel is well-plotted and suspenseful, and I for one could not put it down. Should I meet an adult reader who doesn’t know from science fiction but wants to give it a try, this would be one of the contemporary science fiction novels I’d recommend. Wells is pitching to the masses here, not elite science fiction connoisseurs, and I think she hits her intended market. I can definitely see Fluency turned into a screenplay.

Will I read the sequel? Yes, I will. 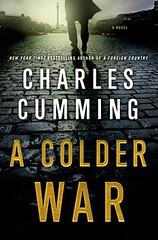 The story is long and complex, packed with detail: the bugging of cell phones and apartments, the surveillance of a suspect who employs his own professional tradecraft to defeat the trackers, multi-layered schemes to force the mole to expose himself, an elaborately-staged capture and rendition operation. As with le Carré’s plots, twists and betrayals are rife.

Nor do I quite believe the operational surveillance details Cumming builds his story upon. Looking at the many failures of our own CIA, and what little I know of the British intelligence services and its successes and failures, is it even possible that MI5 would be able to mobilize, at a moment’s notice, dozens of highly-trained trackers to follow a suspected mole through subways, streets, and department stores, not just on the home front in London but in several foreign cities? What do these professional trackers do when they’re not chasing enemy spies? Do they draw a paycheck when they’re just sitting around between assignments? And how do they manage to stay so proficient? I don’t buy it. The surveillance/tracking team idea seems an overused spy novel convention … and a fantasy. 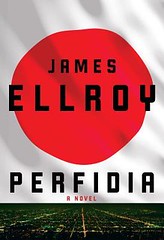 I have a hard time getting into Ellroy novels. His writing reads like a string of staccato gossip rag headlines: brusque, abbreviated, slangy. It comes across as contrived and phony. No one talks like an Ellroy character; I’ll go out on a limb and say that no cop, in any historical era, ever uttered the word “jejune.”

So it’s always a rough start. Then, three or four chapters in, Ellroy’s stories take off and I forget to be irritated with the unreal dialog. In fact, the dialog starts to make sense, in a kind of alternate world, Roger Rabbit way … maybe there were, in the Los Angeles of the 1940s and 50s, cops and robbers who really did talk this way … but who cares, because oh my god did that just happen? And what’s going to happen next?

But with this novel, my initial irritation returned in the second half. Every character sounds the same. Apart from Parker’s alcoholism, every character’s mental processes are the same. Yes, it’as interesting to encounter characters from other Ellroy novels (Dudly Smith and Kay Lake, for example) in other times and settings, but that only carries one so far.

The plot, which centers around the internment of Japanese-American citizens after Pearl Harbor and the start of WWII, is certainly of historical interest, and this too is typical of an Ellroy novel. I felt at times as if Ellroy was inventing parts of his history, but I’ll defer to his vision. It made for an interesting backdrop, whether the details were historically correct or not.

The last third of the novel felt unnecessarily repetitive and dragged out. The Japanese-American detective ponders the evidence to date and draws certain conclusions. Then Bill Parker, the alcoholic, jumps through the exact same mental hoops and draws the same conclusions. Then it’s Kay Lake’s turn, then Dudley’s. You read the same plot development four times in a row. If the character’s mental dialog was unique to that character, this might be interesting. But they all think in the same brusque, abbreviated, slangy way.

This is perhaps my least favorite Ellroy novel to date. Honestly, parts of it felt phoned in. 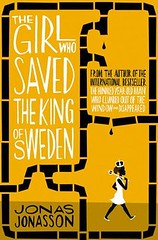 The Girl Who Saved the King of Sweden
Jonas Jonassen

Bought the Kindle version for book club but gave up on it about a quarter of the way in. It’s engagingly written, but too unserious for my taste: the characters are archetypes acting out a moralizing script meant to make us Better People: clever, self-taught black South African girl triumphs over all barriers erected in her path, etc. Right now I have better books to read, and it isn’t like half the book club membership doesn’t show up not having even opened assigned books, now, is it? My turn.