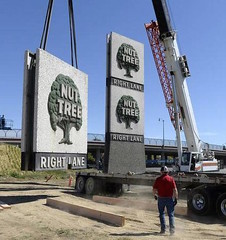 The Nut Tree was a landmark of my younger days in California. In my last year of high school and first year of college, my friends and I expressed our newly-found independence and adulthood by driving from Sacramento to San Francisco on weekends. The Nut Tree, just off the freeway south of Sacramento, was a mandatory coffee stop.

That was in 1964 and 1965. Somewhere in there I met Donna, and she started making San Francisco runs with us. When Donna and I, now married, returned from Germany in 1967, we continued to stop at the Nut Tree whenever we drove down to the City.

Apparently the Nut Tree itself closed sometime in the late 1990s. I didn’t know it was out of business until earlier this week, when I learned they’ve dismantled the last remaining part of it, the iconic sign alongside Interstate 80.

Surprisingly, I find myself moved by the news. Other institutions of our younger days have come and gone, and who cares? This one, though, tugs at me, probably because I always associated stopping at the Nut Tree with adulthood and freedom. The freedom to hop in a car with friends for a drive to the City, to hang around the City Lights Bookstore and try to pass as sophisticates.

“I have to tell you. Sen. Obama is a decent person and a person you don’t have to be scared of as president of the United States,” McCain told a supporter at a town hall meeting in Minnesota who said he was “scared” of the prospect of an Obama presidency and of who the Democrat would appoint to the Supreme Court.

That happened in 2008, during McCain’s run for the presidency. Last week potential Republican 2016 candidate Rick Santorum encountered a similar wacko, who stood up during the Q&A period and addressed him as Senator Santorum. She went on to say a few words about President Obama:

Why is the Congress rolling over and lettin’ this communist dictator destroy my country? Y’all know what he is and I know what he is. I want him out of the White House. He’s not a citizen. He could’ve been removed a long time ago.

Obama tried to blow up a nuke in Charleston a few months ago and the three Admirals and Generals. He has totally destroyed our military. He has fired all the Generals and all the Admirals who said they wouldn’t fire on the American people if they ask ‘em to do so if he wanted to take the guns away from ‘em.

And what did Santorum say in response? He corrected the wacko by pointing out that he was no longer a sitting senator. He said not one word about her crazy accusations. In fact, he seemed to go along with them, agreeing with her that President Obama is a “tyrant.”

Santorum is considered one of the mainstream candidates vying for his party’s nomination.

BTW, this nuking Charleston thing? I hadn’t heard of it before, but apparently it’s a popular right-wing conspiracy theory. How can you even work with people who are willing to believe shit like that? I can barely accept the fact that I share the planet with them.

I blocked another Facebook acquaintance last week. She’d always been anti-Obama, but recently she started sharing Facebook posts from fringe right-wing “news” organizations. Posts with headlines like this: “Welfare Queen Learns She Can’t Get Change with Her EBT Card … It Doesn’t End Well,” each post accompanied by hundreds of vile comments.

I could see where this was heading, so I dropped her before she got around to asking why we don’t have a White History Month. Because that’s always what’s next with those folks.

Speaking of assholes, we had a miserable drive from Tucson to Phoenix last week for our secret squirrel ski trip. Approaching Casa Grande from the south, we passed an overhead electronic sign warning of a crash and heavy traffic ahead. Sure enough, a mile or two later a wall of brake lights blocked all lanes of I-10. We spent the next hour and a half alternately sitting still and crawling along in car-length increments. Drivers were getting out and climbing on top of their cars to see ahead. Other drivers tried to cut the line by driving on the shoulder … until the shoulder became jammed too.

An hour and a half later, we finally passed the cause of the massive traffic jam: a single car, not badly damaged, parked in the median of the freeway. It looked as if it had been rear-ended at a relatively low speed, since all the damage was to the rear bumper. Traffic started to flow again, and a minute later we were once again cruising at 75 mph.

In Phoenix, another overhead electronic sign, another crash ahead, this one supposedly blocking the HOV lane. We always use HOV lanes when we drive through Phoenix and other large cities. HOV lanes are kind of an oasis of calm on otherwise hectic freeways, separated as they are from other lanes by double white lines. Drivers who constantly weave between lanes tend not to weave in and out of HOV lanes, at least in our experience.

Traffic was crawling along in the HOV lane at the same rate as the other lanes, so we stayed put. The second blockage didn’t last as long as the earlier one, maybe 40 minutes, and when we got to the choke point drivers in the other lanes were allowing HOV lane traffic to squeeze over to the right in a civilized and orderly manner (thank you, Phoenix drivers, for not behaving like Phoenix drivers for once). The crash was more serious than the first one … two substantially damaged cars, cops and emergency vehicles pulled up alongside … so at least the ensuing traffic jam was justified. Once again, as soon as we passed the crash traffic started to move again.

During all this sitting and crawling I kept thinking of aircraft carriers, how when one airplane crashes on deck and other airplanes, low on fuel, are lined up on approach, there’s no question of closing the deck for an investigation: they fire up the Black Maria, shove the wreckage off the deck and into the ocean, and reset the arresting cables for the next plane. Why don’t we do that with freeway wrecks? Is it really necessary to take all those photos, measure skid marks, and put out those little yellow flags? We all know what happened: someone drove like an inconsiderate asshole and fucked things up for everyone else.

Truly, when it comes to driving, we are at the mercy of the lowest common denominator, the very crappiest driver, the one who’s always causing wrecks through inattentiveness, incompetence, or drunkenness.

It’s enough to make a sane person question the necessity of traveling anywhere, at any time, for any reason.

I wrote a short story about the experience:

Hours after the freeway comes to a standstill, as dusk turns to night, people realize traffic isn’t going to move before morning. We sleep in our cars. We try to find out about the blockage with our cell phones, but there’s no news, nothing on the radio either. A week goes by. We’re all out of gas now: no more air conditioning, no recharging cell phone batteries. Cell phones are useless now anyway; no one has had any dots for days. Gangs of dads and teenaged sons form, raiding stalled RVs and travel trailers for water, food. Resisters are shot, their bodies pulled off the shoulders of the road, where makeshift toilet trenches have been dug. During the second week helicopters appear, bringing emergency provisions. The pilots quickly learn not to land, instead dumping pallets from a low hover. Two weeks later the helos quit coming. The day after the last helicopter drop our eyes begin to sting and we smell smoke. That night enormous pyres are visible in the distance. We realize the cities are burning.

After worldwide protests, mostly in social media, the homeless-repelling water system in the doorways of Saint Mary’s Cathedral has been turned off, and the Archdiocese of San Francisco has apologized.

Few people read more than the headlines, and if that’s all you read, here’s what you probably know: to keep homeless people from sleeping in the alcoves formed by the covered doorways of the cathedral, church officials installed sprinklers to periodically pour water on them and drive them away. It hardly seems the sort of thing Jesus would do.

But there’s more to the story, as there always is. St. Mary’s Cathedral in fact does a lot for San Francisco’s homeless population, offering them shelter and food, even opening up the church for them to sleep in during holiday periods. The issue was the alcoves, where homeless people who refuse to use the shelter the church provides go to shit, piss, and shoot up.

It seems to me the warm-hearted people who are upset by this story have not spent much time around the homeless, far too many of whom are alcoholics and drug abusers by choice: feral, filthy, dangerous, out of control. They’ve driven us out of downtown Tucson; after being repeatedly accosted by ranting and threatening homeless men during our Monday evening walks downtown, we no longer go.

There has to be a better way. The segment of the homeless population I’m talking about here, the crazy urban drunken drug-addled ones who threaten regular people, the ones who shit in doorways and steal anything you’re not prepared to defend with your life, cannot mix with normal people. Yes, we need to feed and house them; I don’t dispute that. But I don’t want to share my city, my parks, or my neighborhood with them, and neither would you if you spent any time around them.

I blame Reagan, of course. He’s the one who closed all the mental institutions.