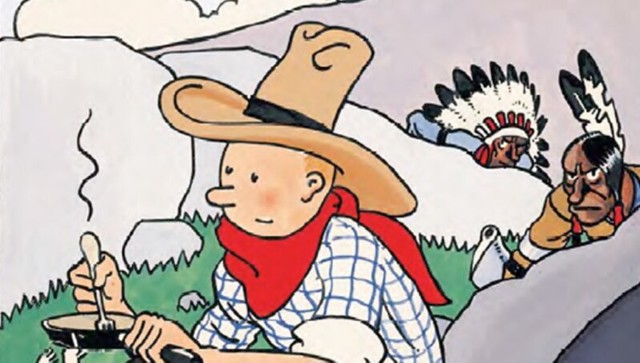 Poor guy can’t catch a break. Tintin’s in Dutch again, this time in Canada, where, as in the USA and other countries, there’s a misguided push to pull racially-dated books, written during the days when stereotypes were more widely accepted, from library shelves. (See what I did there with “Tintin’s in Dutch again”? Huh? Huh?)

Just for fun: The 10 Most Bizarre Cases of Film Censorship.

Well, at least Heather’s mummies are married now, so we’ll hear no more about banning that book, right?

In anticipation of your objections, I think this is related to censorship and book-banning, in that it’s about public pressure on schools and school teachers to conform to conservative social and political expectations: What’s Wrong with Saying the Pledge in Arabic?

“… this latest Republican-led assault on the intelligence of young people is anti-American. If you believe in American exceptionalism, then empower students with critical thinking skills so they can defend it. Don’t give them a Bible lesson. That’s for church.” What’s behind the current push to ban advanced placement history classes from high schools in Oklahoma, Texas, Georgia, Colorado, and Tennessee? In Oklahoma, at least, it can be traced to organized evangelicals trying to halt “the de-Christianizing of America.”

So what’s going on in Kansas? Well, for one thing, the state senate passed a bill that would allow criminal prosecution of teachers and school administrators who expose children to “harmful material.” Apologists for the bill promise, should it become law, it “will not be used to interfere with teaching works of literary or scientific value.” But right on the heels of those assurances, one of those state senators described the novels of Toni Morrison as pornographic.

Jay Asher’s YA book 13 Reasons Why survives a parental challenge in Richmond, Virginia.

From the University of Arizona’s Daily Wildcat: “While parents always have the right to say that their child as an individual should not read a particular book, they don’t have the right to say no one can read it.” Anyone in a position to make decisions about what should or should not be on public or school library shelves should have to stand at a chalkboard and write this statement 500 times.

Of course you do have the right to oversee what your own children are reading, especially when it comes to e-books, and wouldn’t you know, there’s an app for that! Before you buy it, though, you should know that some readers and writers have test-driven it and found it wanting. Others object in even stronger terms.

“When all hell broke loose two years ago over the yanking of Persepolis from the Chicago Public Schools, Mayor Emanuel’s press handlers wrote it off as a misunderstanding. They said some bureaucrat in the bowels of the central office misunderstood what he or she had been directed to do and things got out of control.” Nope. As is so often the case when underlings are blamed, it turns out the direction to remove Persepolis from Chicago school libraries came from the very top.

Should libraries put any and all donated books on the shelves? When it comes to religious or racist tracts and self-published conspiracy theory pamphlets, surely not. But then there’s that gray area occupied by partisan political writing aimed at children, such as Rush Limbaugh’s Rush Revere and the Brave Pilgrims.

Speaking of banned books, this project, the creation of a documentary about the banning of a famous children’s book, seems worthy of support: