Donna and I leave tomorrow on a road trip to a for-now classified destination. If we don’t have internet access where we’re going, you’ll hear from us later next week, when we get back. Meanwhile, those of you who suffer my rants on Facebook will enjoy a few days of peace.

I try not to rant on Facebook, but every now and then something makes me see red and I lose it. As I did yesterday: 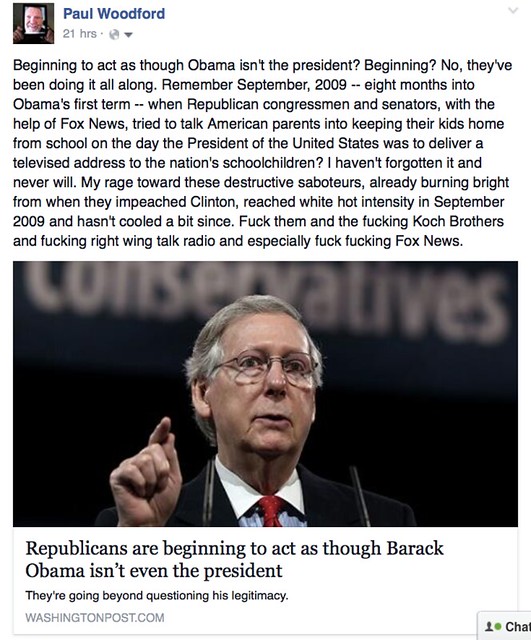 Yes, I meant it, every word. But to lose your temper is to show weakness. I don’t want everyone to know what sets me off, because none of us ever get very far beyond high school, not really, and now I’ve invited everyone to poke me in order to get a rise out of me.

Well, fuck the Republicans anyway, and fuck the media too.

During my last years in the Air Force, and for the ten or so years I worked as a defense contractor afterward, email became a primary means of communication. Even so, it was always considered an informal form of communication. It wasn’t to be used for anything actionable: new rules, policies, final decisions, or the like. Oh, you might hear about new rules and policies via email, but the actual rule or policy was always formally set down upon paper. After all, people can say they never got the email, right? You can’t use that excuse with a formal written directive or regulation.

I don’t think voters care much one way or the other about Hillary Clinton’s emails. She says she’s turned over all the State Department-related emails she sent during her tenure as Secretary of State, and I believe her. Political opponents from both sides, and of course the media (which has always had a hard-on for the Clintons), now want to root around in her personal email archives. Well of course they do. I’d like to root around in the personal email archives of Dick Cheney and George W. Bush. And the Koch Brothers. Where does this all end?

Honestly, if you want to know what Hillary Clinton did while she was Secretary of State, and what the State Department did under her leadership, look at the public record. Look at what they did. Look at the policies and decisions that were made during Clinton’s tenure. Look at the diplomatic initiatives that were taken. Look at personnel transfers, state visits, sanctions imposed on recalcitrant regimes, foreign aid programs, cooperative ventures, trade agreements … look at the formal rules, policies, and final decisions that were set down upon paper.

What they’re trying to get at, by demanding to see Clinton’s personal email archives, is not to learn what Clinton or other high level officials did … that is already known … but to learn what she was thinking. Since when did anyone have the right to know what government officials are thinking? You can know what they did. You cannot know what they thought if they don’t choose to share that information with you.

Me, on the other hand … if anything I share too much. But isn’t that what blogs are for? See you in a few.