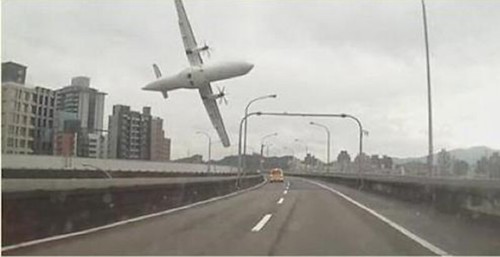 Within a few hours of Wednesday’s TransAsia Airways crash in Taiwan something slipped out about the plane losing power on both engines when in fact only one engine had failed, and I thought “Uh oh, they shut down the wrong engine.” Such a thing is not unknown, after all. Now, as more information is coming in, that’s increasingly looking to be the case: the number two engine quit producing power some time shortly after takeoff, but number one was shut down (on airplanes, engines are numbered from left to right, so number one is the left engine, number two the right).

One of the worst times to lose an engine is on takeoff (the other is on approach to landing). You’re heavy with a full load of fuel, climbing away from the ground at a relatively low airspeed. If I’d lost an engine on takeoff in a twin-engined fighter like the F-15, a single-seater where I was the only one at the controls, I’d have reduced pitch to maintain airspeed and climbed away from the ground at a reduced rate until I was high enough to safely deal with the bad engine. But in a crewed twin-engined aircraft like the TransAsia ATR 72-600, you can continue the climb and deal with the bad engine at the same time by splitting the workload between pilot and co-pilot. One pilot continues the climb with the good engine while the other pilot deals with the bad engine.

I’m betting they experienced a compressor stall on number two shortly after liftoff. The procedure to clear a compressor stall is to shut the engine down, then restart it. I’m betting the pilots divided the workload as I described, only the pilot working the engine problem mistakenly pulled the number one throttle to cutoff, leaving them with zero engines. I’m sure he realized his mistake immediately and began trying to restart number one while the other pilot tried to keep the airplane in a glide. Reports indicate number one had restarted seconds before impact, too late to recover.

There were the standard post-crash statements lauding the “hero pilot” for attempting to steer his doomed craft away from buildings and people on the ground. That’s nice if if makes anyone feel better, but it’s almost certainly wishful thinking.

In the video, you initially see the airplane in what appears to be a wings-level glide, rapidly losing altitude as it descends toward the bridge and the river beyond. I can almost guarantee you all the pilot at the controls was trying to do at that time was to stretch the glide, controlling the descent to keep the speed above the stall. He probably pulled back on the controls when it became obvious they were going to hit the bridge; that’s the point where the airplane does stall and the left wing drops. No heroics; just an attempt to survive.

That’s my perspective on what might have happened. I’m speculating, of course, but it’s interesting to note that TransAsia today cancelled 90 flights to conduct proficiency training for all its ATR pilots.