Side-Eye at the Dog Park 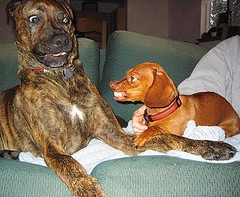 Two days ago Schatzi got into a scrap at the dog park. There were eight or nine balls on the grass, but Schatzi took a shine to one in particular, a thick rubber orange job about the size of a tennis ball. She’s going blind but still has some vision, and I suspect she could see this one more clearly than the others. The orange ball, though, had already been claimed by another dog, and that dog was determined to defend it.

The other dog lay down on its belly with the orange ball between its front paws. Schatzi stood face to face with it, the hair on her shoulders and rump beginning to rise, a low growl coming from her throat. The other dog began to bristle and growl as well. The other dog’s owner decided to defuse the situation by taking the ball away. He reached between them for the ball, and the fight was on.

It lasted only a second, but such yelping and barking! Most of which was coming from the other dog owners! The man who’d reached for the ball dove into the furball and pulled his dog away. I wound up being the one to pick up the ball, which I hid in a nearby tree. Neither dog was harmed.

Afterward, with no ball to fight over, Schatzi and her opponent chilled, and the other dogs, who’d gathered round to watch the fun, went back to chasing one another around the park. The humans gradually settled down, except for the other dog’s owner, who fussily harnessed and leashed his dog and left. I began to feel a certain chill in the air. The other owners were giving me side-eye, as if they thought Schatzi and I were to blame for the ruckus. So we stayed. And after a while I plucked the orange ball from the tree and tossed it to Schatzi, who was delighted to find it again.

Did I mention our dog park has two sides, with separate gates and fences, one for small dogs and one for large dogs? And that Schatzi and I were in the small dog side? With us in the small dog side were six or seven people and a dozen dogs, mostly small breeds but not all. Mixed in were some special snowflakes … a full-sized boxer, a lab, and a golden retriever, big dogs who, their owners will swear if you confront them, would never harm a flea (until they do), are intimidated by other big dogs, and how dare you object to my breaking the rules because my dog is special?

This blog really has gone to the dogs lately, hasn’t it?

2 thoughts on “Side-Eye at the Dog Park”