Ugh, relatives in the heartland. Again. I unfriend out & out racists when they reveal themselves on Facebook, unless they’re kin (I did unfriend a nephew, but it was over animal cruelty). In the wake of Michael Brown’s murder in Ferguson and the protests that followed, some of my relatives have started sharing white supremacist chain letters and race-baiting links they get from Facebook friends of their own. I call them out on it, but I know it’s a waste of time.

Last night one of them shared something Herman Cain posted. I never would have seen it if she hadn’t clicked the “like” button, but when she did it went out to everyone on her friend list, including me. Here’s what Herman Cain … and my niece … thinks everyone should pass around and snicker over: 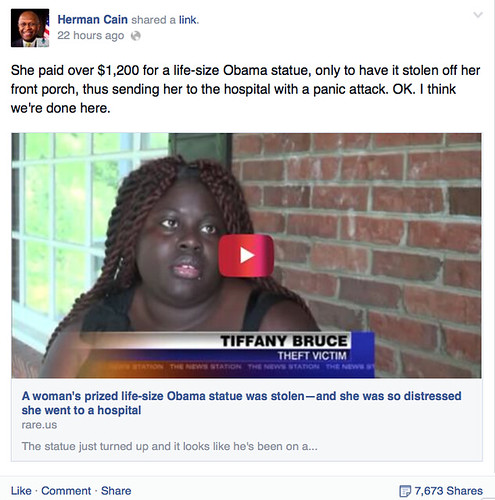 When I grabbed this image off my news feed, about three hours ago, Mr. Cain’s post had already been shared 7,673 times. What you don’t see, because I couldn’t fit it into the screen grab, is that Cain’s post had also generated 15,826 likes and 7,449 comments.

I reviewed some of the comments. Did the woman call the police on her Obamaphone? Did she pay for the statue with her EBT card? Where did she get the money to buy the statue in the first place? Does she have a receipt? Who’s paying for her medical treatment, the taxpayer? Did anyone check the nearest golf course for the missing statue? Those are some of the kinder remarks. You can track down Herman Cain’s Facebook page and read the comments yourselves if you want to see the real ooga-booga stuff … I’d just as soon not repeat any of that here.

The original video, prepared by a local TV station, is blameless. It doesn’t paint the woman who owned the statue as a bad person or a welfare queen. On the contrary, she’s presented as a member of the community, a mother, and a homeowner. She lives in a very nice house in a very nice neighborhood. I was charmed by her sense of humor when she said she planned to buy a Hillary Clinton statue to set next to the Obama statue, but has now rethought the decision.

Cain’s post, however, comes from another place, as indicated by his “OK, I think we’re done here” crack. I think he intends it as a generalized slam on black Americans who support President Obama. I think he wants his Facebook audience to see the woman as a welfare queen, and judging by the comments he’s succeeding. I think Cain’s choice to share this story at this time is part of an organized right-wing campaign to denigrate and belittle black Americans—and anything they might have to say about police brutality and unjustified killings—in the wake of the Ferguson protests. 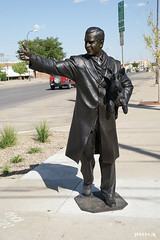 Amazon sells busts and statues of President Reagan. They sell busts of President George W. Bush too, but those are currently out of stock. This life-sized GWB statue might be for sale, though. Who do you think buys this kind of Presidential statuary? White Republicans, maybe? I wonder, do you think the owner of this statue would be upset if I stole it?

I don’t pretend to know why the woman thousands of Facebook users are making fun of bought her Obama statue in the first place, but perhaps it isn’t a stretch to imagine a black American being very, very proud of the first black President.

As I have before, I called out my relative on sharing Mr. Cain’s post. She chooses to pretend she doesn’t know what I’m talking about. She has no idea how that post went out with her name on it. She doesn’t see how anyone could think there’s racial animus behind it, and since the woman is not from Ferguson there can’t possibly be any connection to recent events there. I asked her to look at the comments. That’s where we left it.

God save me from my good Christian relatives!

I’ll go back to something I said before about sharing stuff on social media. When you like and share something that was originally posted to a white supremacist Facebook page, or that has hundreds of racist hate comments attached to it, if you do not disavow the source or the comments you are endorsing it. You are declaring your membership in that tribe.