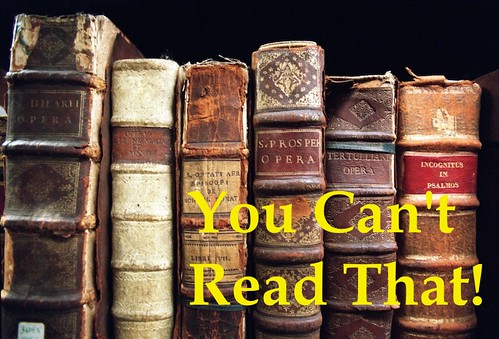 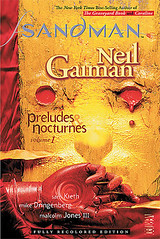 I’m not anti-graphic novel (see my review of Alison Bechdel’s Fun Home); I’m just not interested in fantasy, especially self-consciously dark fantasy. This collection of fantasy and horror conceits reminded me of the proto-Goth phase I went through as a teenager. The grotesque faces gracing every third or fourth page were almost identical to the grotesque faces I drew in my school notebooks when I should have been doing homework.

This collection hit me as much more of a comic book than a graphic novel. There are even a couple of dream characters wearing what look like skin-tight superhero outfits, posed in Spiderman-style crouches. It put me off. The Sandman is for kids, not grownups—such was my reaction, at any rate (call me a snob all you want, I can take it).

The Sandman is listed by the ALA as one of the top banned and challenged graphic novels. I’m interested in the reasons people try suppress books, and I read this graphic novel with an eye to that. The ALA says the most frequent complaints about The Sandman refer to anti-family themes and offensive language. Others complain that it’s unsuited for its intended age group.

Unsuited for its intended age group? The theme of dream and nightmare is a dark one, and the preponderance of illustrations are likewise dark (the printer probably goes through a year’s supply of black and purple ink with every issue). Since The Sandman presents itself as a comic book, and indeed was originally marketed as a series of individual comic books that were later assembled into this collection, its intended audience certainly included children, probably well down into the pre-teen years. But apart from outright children’s fare like Caspar the Friendly Ghost, aren’t most comic books dark these days? I suspect if kids find The Sandman too dark, they simply won’t read it.

Is it anti-family? It’s more that it’s not about family, and the only answer to that is “So?” Usually (in my experience), accusations of being anti-family are leveled at books that don’t feature happy, well adjusted Christian protagonists. That’s a definite strike against The Sandman, if that’s where you’re coming from.

Offensive language? Here I draw a blank. Although I admit to skimming some of the final pages, I don’t remember any such thing.

Apart from looking for reasons why people might want to suppress this book, I couldn’t whip up any enthusiasm for it. It’s just not my thing, so I can’t speak to its merits. Obviously, many adult readers love it. I personally think Neil Gaiman has been milking the same two or three fantasy themes for years now, but that’s just my opinion. YMMV, as they say.