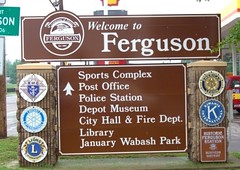 Whenever black Americans take to the streets over police brutality and killings, racist email forwards follow. Over the past week I’ve gotten two, both claiming the media ignores black on white crime out of political correctness. What world do these people live in? Since when has the press ignored black on white crime? I think what they really mean is they wish the press would just ignore a certain white on black crime that took place in Ferguson, Missouri.

I’m sick of hearing naive do-gooders say racism will go away when the last of the old white bigots die off, just you wait. Bullshit. Those old white bigots taught their children, and their children are teaching their children. Racism is everywhere in this country, as pervasive as it ever was. Not only is it not going away, it’s arguably getting worse, as voting restrictions and the return of segregated schools nudge us back toward the 1950s.

The story on Michael Brown, the 18-year-old shot dead by a Ferguson policeman, keeps changing. Just this morning I read that the video showing Brown stealing cigarillos actually shows him paying for them. People are already disputing the autopsy results that came out over the weekend. By this time tomorrow the story might take yet another direction. So I’ll say nothing about any of that, and wait for the dust to settle.

I do believe, however, that when people take to the streets, it’s usually not over a single incident of police brutality or extrajudicial killing. That shit happens all the time; there’d be riots every day. When people do demonstrate and protest, it’s usually in communities where there’s a long history of police abuse, followed by some straw-breaking-the-camel’s-back incident like the Michael Brown shooting.

When I was young I lived for a year at my grandparents’ house in Brentwood, another inner-ring St. Louis suburb. This was during the 1950s while my father was away with the USAF and my mother was in a sanitarium recovering from tuberculosis. My memories of Brentwood are so faded they might as well be made up, but the brief glimpses of Ferguson I see on TV remind me of Brentwood. I turned to Wikipedia, where I was surprised to read that as of the 2010 census, Brentwood was still 87% white. I’m going to guess relations between law enforcement and the civilian population in Brentwood are friendly.

A former squadron mate and flying buddy has died, and Donna and I are driving to Alamogordo, New Mexico on Thursday to attend his funeral. I flew with him at Soesterberg Air Base in the Netherlands; following that tour he and I were the first two F-15 pilots to report to Elmendorf AFB in Alaska when the fighter squadron there converted from Phantoms to Eagles. Many, many memories, all of them good. Alamogordo is only 400 miles from here, so we’re paying our respects in person. I don’t know who else is planning to attend, but I expect we’ll see one or two old friends. When we were in Alaska we were pretty close to our friend’s surviving wife, and we both want to see her again.

As for now, I’m hunkered down at home, waiting for the next monsoon rain cell to pass overhead. Here’s a photo I took driving home from the gym half an hour ago, looking down on our housing development and toward the Santa Catalina Mountains, with some heavy rain falling a few streets to the north. 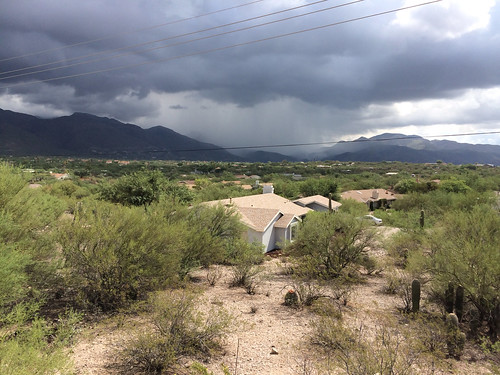