In my previous post I revealed two aspects of my personality I’m not particularly proud of, but which I have come to accept: elitism and authoritarianism. I characterized the Murrieta, California protestors—the ones turning back buses attempting to bring immigrant children to a Border Patrol holding facility—as a pack of mouth-breathing racist morons who should be ignored by the media and frozen out of the national debate over immigration. I went on to suggest President Obama send in federal troops to clear the rabble off the streets, not just in Murrieta but at the Bundy Ranch as well.

Really, I don’t know how anyone who’s ever read a word I’ve written could be surprised at my hostility toward know-nothings, and yet at least one reader at Daily Kos, where I cross-posted the entry, pretended to be. I’ve never made a secret of my disdain for the willfully ignorant, nor have I concealed my military background and the authoritarian impulses that come with it. Like I said, not proud, but there it is.

I was in a black mood when I wrote yesterday’s post, but I’m in a better mood today. This thanks to Rachel Maddow, who last night featured a long segment titled “Help for Immigrant Children Grows Amid Border Furor.” 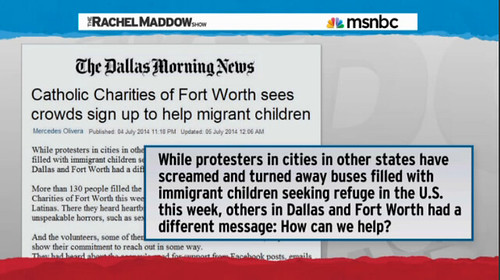 People all over the country, even in deep-red Texas, are offering help: food, shelter, clothing, legal representation, even education and training in the form of classes and lessons for kids held in holding centers. Some of these good people are acting individually; some are working through church, charitable, and professional groups. Some—like the Dallas County judge Rachel interviewed during the segment—are working within the government. These people began to mobilize not after learning of the shameful actions of a handful of white power vigilantes in Murrieta, California, but weeks ago, when the first waves of child immigrants began to cross the Rio Grande.

I needed reassurance that the Bundy Ranch and Murrieta types are a marginal minority, and Rachel Maddow gave it to me. Most of us, regardless of how strongly we feel about immigration and border security, combine compassion with our support for the rule of law. As much as it pains me to say it, the rule of law in this case is being represented by the Border Patrol and ICE—not the vigilantes screaming for immediate deportation, shooting border crossers on sight, or introducing piranhas into the waters of the Rio Grande.

My only remaining question now is, where are the other major TV news anchors? Is it just going to be Rachel reminding us we’re not all mouth-breathing racists? As far as I can see, the other media outlets are totally focused on the protestors in Murietta, just as they are on the gun nuts still hanging out at the Bundy Ranch. This isn’t balance; in fact it is the opposite of balance.

Thanks, Rachel. I needed a sanity check, and you delivered.