I knew about Banned Books Week, but 404 Day is new to me.

The South Carolina House has penalized two state colleges to the tune of $70,000. Their crime? Assigning gay-themed books to students.

Strongly worded, and justifiably so: “The Rude Pundit sees little difference between the outraged South Carolina lawmakers and the outraged Brandeis protesters. They are on the same side of the same filthy coin, which reads, ‘This person says things I don’t like; therefore, no one should hear this person.'”

Is it news that banned book readers are more likely to be involved in their communities? It shouldn’t be.

From an email sent to YA author Lauren Myracle: “I recently read the vulgar hot tub scene in your book ttyl, and I was appalled. I immediately had all of your books pulled from our local library.”

YA author John Green: “Earlier today I received an email from a high school English teacher in Strasburg, Colorado who plans to teach an elective Young Adult literature course. A group of parents created a petition to ‘cleanse’ the book list, claiming that the majority of the books on the curriculum, ‘are profane, pornographic, violent, criminal, crass, crude, vile, and will result in the irreparable erosion of my students’ moral character.’”

Whoa. In my last YCRT! column I mentioned pending legislation in Kansas that would make it possible for parents to bring legal action against teachers and schools accused of teaching “objectionable material” to minors. This could become a new weapon in the book banners’ arsenal, and I’m disturbed to see it being deployed elsewhere in the country (in fact I now wonder whether the Kansas bill originated with the American Legislative Exchange Council, and whether identical bills will soon appear in other red state legislatures). Here’s an example from Delaware, where parents are trying to ban the teaching of Aldous Huxley’s Brave New World: “Ron Hagan, a father of a Cape Henlopen High School student … said parents might be able to file suit if they felt the school taught obscene content. He argued the school should choose a different book which would emphasize positive instruction.”

The American Library Association has released its list of the 10 most challenged books of 2013. 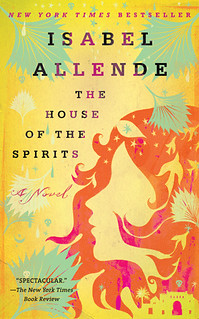 The House of the Spirits
Isabel Allende

I ordered a copy of The House of the Spirits from my local library after learning it was the subject of a recent banning attempt at a North Carolina high school. The parents who challenged the novel, which had been assigned to their 10th grade children, described it as graphic, immoral, and pornographic. In a now-famous letter to the school board, Isabel Allende defended her work and the challenge was overruled.

In a recent development, however, Fox News has taken up the parents’ cause and is also calling for a ban, misleading viewers by stating that the novel is part of Common Core, a set of educational standards increasingly opposed by conservatives (in fact, the novel has been taught at high schools around the country for decades, has been the recipient of multiple awards, and … naturally … has nothing to do with Common Core).

Before I review the novel, let’s talk about the attempted banning and whether The House of the Spirits really is a “graphic, immoral, and pornographic” novel that should be off limits to high school students.

The challenging parents’ objections center around sex, rape in particular but I suspect happy consensual sex as well, since the author doesn’t have Jesus smite the fornicators on the spot. What sex there is is not described in any sort of prurient detail … no descriptions of naked bodies, no mention of genitals or positions … what’s there is along the lines of “they made love on the riverbank,” or “Esteban took the girl back to the hacienda and forced himself upon her.” Hardly titillating, but if any mention of sex at all is your definition of pornography, then yes, this is an adult novel.

I can’t help thinking the parents who brought the challenge were equally disturbed by the lack of explicit religiosity on the part of the novel’s characters, and by the depiction of the central male character’s conservative views as wrong-headed and out of step. This character, the patriarch of the family at the center of the novel, is shown in a particularly unflattering light, so in addition to thinking it immoral, the parents might also see The House of the Spirits as an attack upon Christianity and traditional father-knows-best values.

Isabel Allende’s novel, while it acknowledges sex, is not about sex; it is a novel of politics and societal change, written from a decidedly progressive point of view. This, far more than the brief mentions of sex, probably explains why Fox News has thrown its lot in with the book banners.

Now, for the novel itself:

I often tell my bookish friends I don’t care for magical realism, so when they heard I was going to read The House of the Spirits they took delight in reminding me that Allende’s novel is an exemplar of magical realism. I did not find it so, or more accurately did not find the small amount of magical realism I encountered distracting or off-putting. Clara is clairvoyant, as befits her name, and her daughter and granddaughter believe she communicates with them from the grave. Okay, Clara can also move small things around with her mind. None of this, at least to me, seemed essential to the story, so I read on willingly.

A family saga is at the center of the story, unfolding over several decades against the political and social backdrop of a South American country, from approximately the 1910s to the 1980s. The country is firmly in the hands of conservative landowners, until it isn’t, at which point things turn ugly: the ousted power brokers sabotage the initiatives of the new Marxist president, eventually bringing on a military coup with its attendant inquisitions, violence, and rampant murder. The family is directly affected by all of this, and in the case of the youngest generation, who are in their 20s and 30s at the time of the coup, intimately involved as well.

The patriarch, Esteban Trueba, lives out the span of the novel and dies at an advanced age. He’s one of the great villains of literature: a horrible man, utterly dislikable. He beats the peasants who work on his ranch, pays them in scrip they must spend at the company store, and rapes one young teenaged girl after another, producing bastard offspring who will later haunt his life (and the lives of his legitimate children). He beats his wife. He throws tantrums and smashes inanimate objects. At one point he evicts the peasants from his land, after burning their meager possessions and even their homes. He’s bad.

Though Esteban is mostly written about in the third person, there are brief passages where he talks to the reader directly, presenting himself as a decent man who only wishes the best for his peasants and family, but must show a firm hand, etc. I could not figure out the reason for these first-person interludes until the very end of the novel, when Allende reveals that Esteban’s granddaughter is the person assembling this family history, and that in addition to consulting her now deceased mother’s extensive journals, she also allows her old grandpapa to write some passages.

Though the country of the novel is not named, it’s clearly Chile, and the political and social developments that dominate the last third of the novel are based on actual events in that country, including the election and eventual deposing of Isabel Allende’s uncle, Salvador Allende. The great poet Pablo Neruda also makes appearances through the novel, though he is never referred to by name.

It’s a hell of a story, fascinating throughout, and for those of us who know a bit about Salvador Allende and the military coup that ousted and assassinated him (and thousands of others), a chilling read as well.

I don’t remember reading anything this heavy in high school. No, that’s not right, sure I did: The Grapes of Wrath is roughly comparable in the political vein; East of Eden, which spans generations against a backdrop of political and societal change, is even more similar. I guess what I’m trying to say is that I’m heartened teachers are still encouraging students to read adult literature like this, even more heartened that a school board in North Carolina stood by its guns and kept the book on the reading list. If I may speak a little more personally, I hope Fox News and the politically-motivated book banning mob they’re whipping up take a wrong turn and march right off a cliff.