This is a post from 2009. In it, I complained about the blurring of license plates and brand names in commercial videos and television programs, presumably done at the behest of corporate lawyers anxious to avoid lawsuits. Since then it’s grown worse, to the point where non-commercial photographers and video producers — people like you and me — have taken to blurring images to conceal license plates and even faces. As in this photo taken by a spectator at a car show: 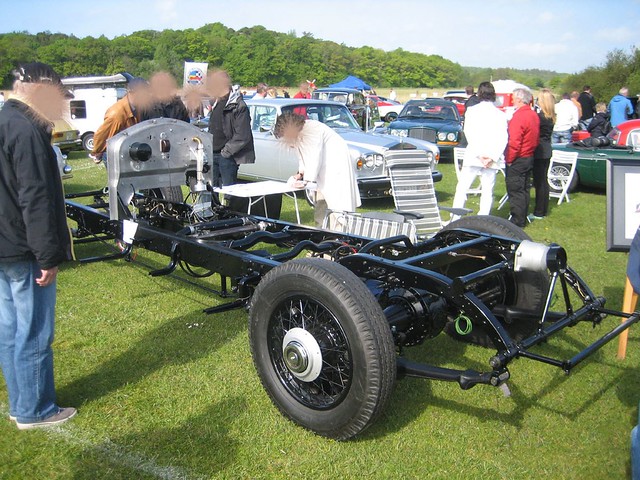 I mean, what the fuck? Do random people at public events have some legal expectation of privacy? Do amateur photographers have to get signed permission slips from every person who happens to wander into their camera’s field of view before clicking the shutter?

This sort of shit drives me crazy. Quit watching lawyers on TV and trying to think like them. In fact, kill the lawyers. Kill all of them.

p.s. At the end of the original post I mentioned a televised episode of Jay Leno’s Garage, in which the producers blurred the license plate of an antique car owned by Jay Leno, in an apparent effort to prevent hackers from tracing the ownership of said car to … Jay Leno? Of course I realize the car may belong to another rich person who doesn’t want his or her identity revealed, but the widespread notion that regular people can look up license plate numbers to learn who owns the cars they’re attached to is false … cops can, but we can’t. In any case, here’s a screen grab from the episode in question, just so you know I wasn’t making it all up. 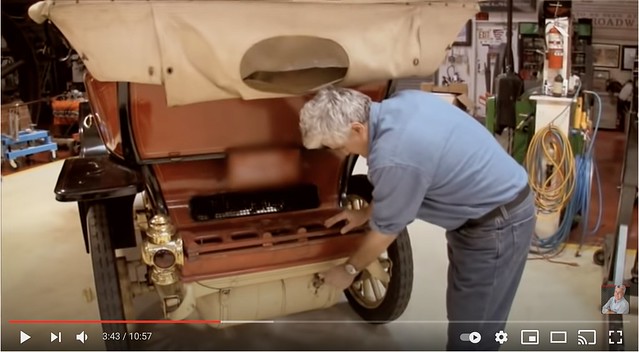 I was having a “one hundred channels and nothing to watch” night last week when I found myself drawn to a Discovery Channel show called “Destroyed in Seconds.” I know, I know, I can hear you tut-tutting from here; we all have our couch potato moments.

Back in the day, the robots on MST3K called A&E the “all-Hitler channel.” There are a lot of all-Hitler channels now, and Discovery is but one. Their business model is to patch together shows from royalty-free, public domain sources: old documentaries, police and surveillance camera clips, news feeds from TV stations around the world. They hire a narrator, jazz up the clips as best they can, and leave plenty of room for informercials. And we can’t get enough of it. Destroyed in Seconds is nothing more than crashes and explosions caught on camera. Each crash or explosion is shown five times: once in real time as a pre-commercial teaser, then, after the commercial, once again in real time, then backwards, then in slo-mo, then again in real time. They milk a half-hour show out of four ten-second crash videos. The one I watched featured a train hitting a truck, two car crashes, and a building collapse. Real mouth-breather stuff.

So here’s my bitch:

We’ve become so used to TV fuzzing out license plates, we don’t ever ask why. Maybe we should. After all, you can stand on a street corner and see thousands of license plates, including mine, should I happen to drive by. You can take a video or photo of me driving by and show my license plate to friends and strangers. What you can’t do, apparently, is show my plate to others for commercial reasons. But suppose you did anyway … what can the people you show it to do with my plate number? Can they look it up and trace it back to me, then send me spam? Learn my address and come steal my car? Tell my wife I was parked behind the whorehouse when I was supposed to be getting the oil changed?

They blur images so frequently on TV reality shows, it’s intrusive. Watching a typical episode of Destroyed in Seconds, you notice the blurs more than you do the crashes. On the episode I watched the other night, they didn’t just fuzz out plates … they fuzzed out the company logo on the truck that was hit by the locomotive, the name of the railroad on the side of the locomotive that hit the truck, peoples’ faces, the words on the T-shirts people with fuzzed-out faces were wearing, sponsor logos on race cars, billboards and advertising placards visible in the background. They fuzzed out the brand on a can of soda someone was drinking.

When an airliner slides off a runway and comes to rest in a nearby ditch, company reps will cover up the logos on the wreckage with big tarps. They don’t want the traveling public to associate their brand name with a crash. How long will it be before corporations start pressuring TV production companies to blur images of products involved in wrecks? One of the cars that crashed on TV was a Chevy. Why, people might not buy Chevys if they know they crash! Once you start thinking that way, there’s no end to it, and pretty soon shows like Destroyed in Seconds will have to resort to cartoon recreations of actual crashes, using blobby little Toonville cars and trucks, so they can’t be sued by GM.

It was a crap show, but it would have been a better crap show without the blurring. The image that stays with me is not the wrecked Chevy, it’s the image of a corporate lawyer whispering prohibitions in a producer’s ear, ruining everything. And I guess that’s what this unfocused post is really about … effing lawyers.

Update (01/07/09): At Jay Leno’s Garage, there’s a video about Leno’s 1907 White Steamer. Would you believe they blurred the license plate? Because if they didn’t some arch criminal with access to California DMV records might be able to learn that the plate belongs on a 1907 White Steamer belonging to Jay Leno?