Phase 2 has begun. Wednesday afternoon’s knee surgery was successful and, after three nights in a hospital room, I was allowed to go home Saturday afternoon. Outpatient PT starts tomorrow.

The dogs were glad to see me home again, especially Schatzi, who has always taken a motherly interest in my welfare. She does not approve of the leg flexion/extension machine I have to strap myself into three times daily:

She’s not just keeping me company. She’s keeping one eye on that damned machine, lest it get any ideas.

So many things I have to rely on Donna for now. So many things I can’t do without her help. I’m so lucky to have her looking out for me! She stayed by my side, went to hospital PT sessions with me, picked up my prescriptions, set the house up so that I can get around safely, and helped me build nests in the family room and home office. 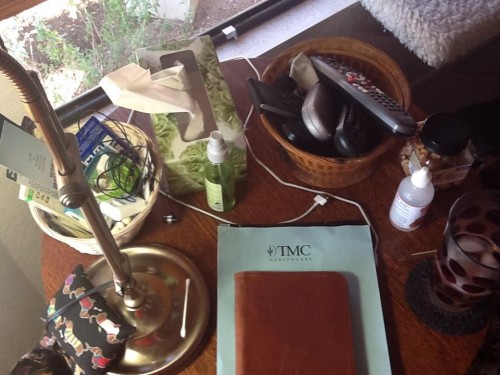 Nesting, I now realize, is a big deal: if you want to be able to get stuff done and don’t want to have to constantly hobble around on a walker to fetch this or that, you have to put some thought into setting up your nests. The photo shows part of my front room nest: access to all the TV & DVR remotes, phones, Nook & iPad. Not shown: a high office chair I can get in and out of easily and a rolling footstool to rest my leg on when I’m not flexing it. We strapped a carry bag to the walker the hospital gave me so I can take important things from one end of the house to the other. The leg flex machine is on a spare bed; Donna rearranged the bathrooms to accommodate me and my walker.

I have a feeling the walker won’t be necessary much longer. The new knee already feels better than it has in years; the only problem now, really, is post-surgery stiffness. One thing that’s clear to me already is how much more comfortable I am at night in bed. After hurting my knee last September I could only sleep on my back with my left knee bent slightly to the outside … now I can sleep on my sides again with my knee just about anywhere.

Life is good and clearly is going to get better day by day. I’ll try to blog regularly during my recovery, so do check back.

Just one non-medical comment for now: after surgery they wheeled me into a two-bed recovery room. Another patient was already there. We both had wall-mounted TVs and he kept his on Fox News the whole time. I decided to put up with it and not try to drown him out with my own. Mostly I was talking with Donna anyway, not paying close attention to the TV. What got through, though, was plenty: the constant bombardment hateful partisan rhetoric meant to keep the audience alarmed, frightened, and mad; a fixation on Benghazi; and the nasty, nasty commercials from the same two or three sponsors out to fleece the old (buy gold! buy silver! get a reverse mortgage!). When my roommate left Friday afternoon I finally turned my TV on, setting it to MSNBC. I watched Rachel Maddow that night, then turned the TV off. My mistake was turning it back on Saturday morning, still set to MSNBC.

Rachel is my only nightly watch on MSNBC. She seems sincere; she’s obviously smart; she digs into stories behind stories and leads the way for her cohorts. When it comes to her cohorts, however, I can’t stand ’em: not Ed Schultz, not Chris Matthews, not Lawrence O’Donnell, not Al Sharpton. None of them seem sincere to me. Their rhetoric, minus the substitution of Democratic Party talking points for Republican talking points, is just as relentlessly partisan, overblown, and alarmist as that coming from the right.

Occasionally Melissa Harris-Perry will sit in for Rachel and I’ve come to respect her intelligence; likewise that of another sub, Christopher Hayes. And I’ve heard good things about their own MSNBC news discussion shows, which are on in the mornings. So there was Chris Hayes, Saturday morning, talking about the representation of Arab women in Western media … for one entire and excruciatingly boring hour. Two of the women had heavy accents and one was actually wearing a burnoose. It was like watching a South Park parody of liberal talk shows. I can’t remember what Melissa’s panel was talking about during the next hour, but it was just as off-putting and ineffectually lame as Hayes’ panel. I had a new roomie by this point and was actually embarrassed. And the ads! Guess what? They were the same ones! There’s Fred Thompson again, trying to talk me into grabbing a few thousand dollars now and losing my home later! There’s Debbie Boone, trying to lead me to the Fountain of Youth.

Why does our side fall into to self-parody so easily? If it weren’t for Rachel I’d never watch MSNBC again. When people say Fox and MSNBC are basically the same, I can only nod and agree. When people start that “both sides do it” bullshit, it’s going to be harder for me to argue that it’s not so, because here’s one case where both sides absolutely do do it … and the advertisers are obviously in on it and laughing all the way to the bank.