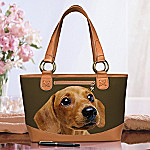 Happy? Sure, why not? For one thing, this bag makes me happy. I wonder if I can find one for Donna? Damn, that was fast … thanks, Google! And only $79,95! Well, maybe for Christmas.

I’d be happier if Donna weren’t coming down with the cold I’m finally shaking off. The bad part is she flies to LA tomorrow morning to visit a friend, and there’s no way to cancel the ticket. Not that there ever was, I guess. Oh, well, at least my cold lasted only a week, and apart from the first couple of days I didn’t suffer much. I hope it goes as easy on her as it did on me.

I rode the Ducati to the corner coffee shop this morning and saw a familiar face in line ahead of me, that of a woman named Martha McSally, whom I knew as an Air Force A-10 fighter pilot back in the day. She’s out of the USAF now and running in a GOP primary race for Congresswoman Gabrielle Gifford’s old seat. I introduced myself and she said she remembered me, though that could have been the politician talking (if it was, I totally forgive her). I told her I wished more retired military people would run for office, since so few politicians know anything about the military these days.

She mostly talked election strategy and didn’t get into core beliefs. Obviously she’s conservative; obviously I’m liberal. A friend of mine hopes she wins the primary and the election. He’s not especially conservative, and he doesn’t think she’s as conservative as she says she is. In his words, she’s smart enough to know what needs to be done and will do the right thing once in office. I’m not so sure. I agree she’s smart (far smarter than any of her GOP primary opponents), but I sense she’s doctrinaire on basic Republican issues (welfare, entitlements, health care, immigration, taxes) and will vote the party line. Still, I admire her and wish her well. And I’m pleased to learn she’s a neighbor.

Of the two contenders on the Democratic side, Ron Barber—the guy who’s filling the seat until the general election—is a Blue Dog, and I’ve got no use for Republicans who pretend to be Democrats, even though Gabby Giffords was one too, and I thought she was a fine congressperson. But this guy … well, I’ll tell you what it is: two nights ago he was on our local NPR station blowing wind about how “now is not the time to politicize these tragic shootings by talking about gun laws,” now, of course, being any time ever. He’s a tool of the NRA, and he just lost my primary vote, which will now go to this opponent, Matt Heinz. So there.

All politics is local, right? Right.

Happy? Yeah, I’m pretty happy. And it’s a good day to be alive in Tucson, Arizona.