I finally tackled a long put-off project, the famous boeuf bourguignon (beef stew in red wine with bacon, onions, and mushrooms) from Julia Child’s Mastering the Art of French Cooking. 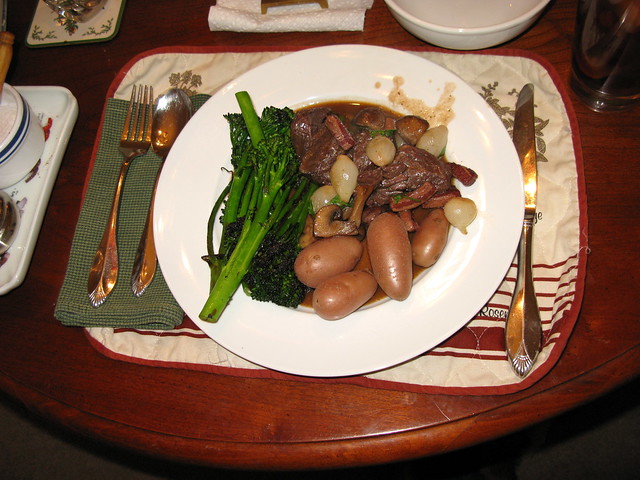 This is a recipe you’ll need to study and understand before you start, especially if you’re going to prepare it by yourself.  You’ll need a plan: mine was to prepare the dish in stages, making sure I had all the ingredients to hand, as well as the pots, pans, strainers, and utensils I’d need.

A well-stocked kitchen is a must, and with that in mind I’m including a list of equipment.  The items listed are the ones I used, not necessarily what Julia would have used.

Though the ingredients and cooking methods I describe here are Julia’s, I’ll organize my directions around the stages I used during its preparation.  I’ll also describe a few important cooking techniques that aren’t necessarily included in Julia’s recipe: some come from watching PBS tapes of Julia’s TV shows, some come from elsewhere in Mastering the Art of French Cooking, some come from my own addled mind.

Study the recipe first and mentally map out how you’re going to get it done.  You’re actually cooking three things here: the beef stew, the pearl onions, and the mushrooms (in fact, if you use Mastering the Art of French Cooking, you’ll be flipping between three separate recipes in different parts of the book).

You can blanch, peel, and sauté the pearl onions early and set them aside; likewise the mushrooms.  You can prep the bacon and beef early.  If you’re going to serve the beef bourguignon with potatoes and broccoli, as I did, you can cook those during the last half-hour, while the stew is still in the oven.  With that, I’ll describe how I organized and prepared my cooking, and how it all came together.

Preparing the bacon and beef

Cut off the bacon rind and then cut the bacon into lardons: little French fry-like sticks about ¼ inch thick and 1½ inches long.  Bring 1½ quarts of water to a boil in a pot and reduce heat to simmer.  Throw the bacon rind and lardons into the water and simmer for 10 minutes.  Drain, dry, set aside.

Prepare your beef by cutting off excess fat, then slicing it into large chunks (2 to 2½ inches in size).  Put the beef chunks on paper towels and pat them down with more paper towels until they’re dry.

Peel and slice the carrot and onion, set aside.

Heat some olive oil in the frying pan.  Sauté the bacon lardons and rind over moderate heat for 2 to 3 minutes, browning lightly.  Remove to a bowl with a slotted spoon.  Heat the remaining oil until it’s almost smoking, then sauté the beef to brown it (it won’t really brown unless it’s dry).  Don’t crowd the beef; brown just a few chunks at a time.  Remove the browned beef to a bowl with a slotted spoon.

In the same oil, sauté the carrot and onion slices, set aside.

Stir the wine and about 2 cups of the beef broth into the casserole with the meat, enough so that the meat is barely covered.  Add the tomato paste, garlic, bay leaf and thyme, and the sautéed carrot and onion slices from before.  Stir it all together and bring to a simmer on top of the stove.  Cover the casserole or Dutch oven and place on the bottom rack of the preheated 325° F oven.  Cook for 2½ to 3 hours.  Check it after about an hour to make sure the liquid isn’t boiling away like crazy; if it is, reduce the heat a little.  The beef is done when you can pierce it easily with a fork.

Boil the pearl onions for 1 to 2 minutes.  Drain them and plunge them into a bowl of iced water to stop the cooking.  On the cutting board, slice off the root end of each onion.  Grasp the other end of the onion firmly with thumb and finger and squeeze it to pop the onion out of its skin.  Throw the skins away.  Pierce the cut end of each onion with a sharp knife twice crossways, going in just a little way.  This will keep the inside parts of the onion from poking out when you cook them.

Heat a little butter and olive oil in the frying pan.  Add the pearl onions and sauté them over moderate heat for about 10 minutes to brown them, rolling them around.  Add some beef stock, cover, and simmer for about 20 minutes.  Remove with a slotted spoon and set aside.

Rinse, drain, and dry the mushrooms.  I used baby portabellas, about 1½ to 2½ inches in diameter.  Quarter the mushrooms lengthwise.  Heat butter and olive oil in the frying pan and sauté the mushrooms for 4 to 5 minutes to brown them, shaking and tossing the pan to turn them.  Just do a few pieces at a time so as not to crowd the mushrooms.  Remove with a slotted spoon and set aside.

Remove the beef stew from the oven and carefully drain it through a colander or strainer positioned atop a large pot.  Wash out the casserole (or just use another if you have two) and return the beef and bacon to it.  You can pick the beef and bacon lardons out of the colander with tongs, shaking each piece to get the bits of cooked onion and carrot off.  Toss the beef and bacon to mix it, then layer the pearl onions and mushrooms on top.

Skim the fat off the sauce you drained into the pot, then simmer it in the pot for 1 to 2 minutes, skimming off any addition fat that rises.  There should be about 2½ cups of sauce, and it should be thick.  If there’s not enough sauce, add more wine and stock.  If the sauce is too thin, boil it down to thicken it.

Pour the sauce over the meat, pearl onions, and mushrooms in the casserole.  Baste the sauce over any uncovered parts if necessary.  Sprinkle with fresh parsley as a garnish.  Serve it as shown with potatoes and broccoli (you can also serve the stew over noodles).  I boiled unskinned new potatoes in salted water for 20 minutes and sautéed the broccoli in butter for about 10 minutes).  I also put crusty bread on the table (you’ll want something to mop up the sauce with).

If you want to serve the stew later, you can refrigerate the casserole, covered, then bring it back to a simmer for 15 to 20 minutes before serving.

This recipe serves 6.  Even though there are only 3 of us, I didn’t even think about reducing the ingredients … leftover stew is just as good the next day!

Interestingly, there’s an error in the book version of Julia’s recipe.  While she mentions peeling, slicing, and browning a carrot and onion, she never does tell you what to do with them.  In the TV episode, she skips the onion and carrot altogether.  I was certain the carrot and onion were meant to bake in the oven with the meat and sauce, so I went online and found a Food Channel beef bourguignon recipe “based on” Julia Child’s recipe.  There, I finally found confirmation: the sliced carrot and onion go into the pot and get strained out later.  I wonder if Julia was ever made aware of the oversight?  I also wonder, based on the TV show, whether Julia ever used the carrot and onion at all?

Though not complex, beef bourguignon the Julia Child way is a fair amount of work (but oh so worth it!), and you’ll be busy for a few hours.  I posted an entry about my day with Julia on my other blog, Paul’s Thing, if you’re interested.