“If democracy came to China they would end up electing idiots, as in America.”
—Kim Stanley Robinson, Red Moon 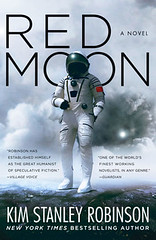 My thoughts on “Red Moon” are similar to those I expressed in my review of KSR’s previous SF novel of ideas, “New York 2140.”

I loved the first half of “Red Moon,” with its characters, plot, and lunar setting (particularly KSR’s detailed descriptions of man-made sublunar infrastructure, which are fascinating though wildly optimistic). I learned from (and was charmed by) KSR’s nerdy exploration of China’s history, economy, and place in the world. In the second half I found myself wading through long and awkward lectures, poorly disguised as organic dialog, on fictional revolutions in China and the USA; shaking my head over KSR’s even nerdier fixation on currency (who else would describe dollars and yuans as “seigneurial currencies”?); lifted up again in the final chapters as the characters once again took the lead, staying one step ahead of their enemies.

In other words, “Red Moon” is a Kim Stanley Robinson science fiction novel, almost by definition a treat. 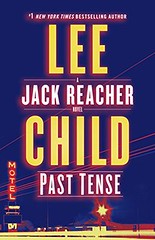 Past Tense
by Lee Child

My wife and I both wanted to read the latest Jack Reacher thriller. We had one library copy between us, and she grabbed it first. Since she reads at a more leisurely pace than I do and the due date was coming up fast, I talked her into letting me cut in. I polished it off over the course of two evenings, and now she has it back.

She started asking me questions right away, burning to know the resolution of a couple of plot lines, being as how … to invoke a metaphor Reacher himself invokes in “Past Tense” … I’d seen the end of the movie. Dear reader, I did my best to avoid spoilers (as I shall do in this review). I think I succeeded, because she’s busy flipping pages again.

Speaking of movies, Lee Child has announced that he and the producers are looking for a larger actor to play Reacher in a series of streaming TV movies, replacing the actor who played him on the big screen, Tom Cruise. I previously defended the choice of Cruise, who if not in stature and bulk at least projected a Reacher-like attitude, but since Lee Child himself has come around, I’ll join millions of Reacher creatures in saying “Whew, it’s about time!”

Back to “Past Tense.” Classic Reacher, classic villains (intent on carrying out classic literary devilment), classic damsel in distress (only in this case the damsel is a young Canadian couple). The only thing missing is sex, but never fear, Child has Reacher play matchmaker, so at least there’s boffage by proxy. Totally satisfying Reacher, and we learn some new things about the mysterious father, Stan Reacher, along the way. Can you see Jack Reacher becoming an avid birdwatcher? After reading this novel, I can … and if that’s not character development, what is? 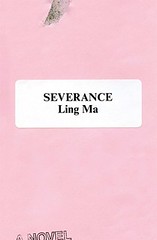 A well-written novel of aloneness, set in a contemporary but depopulated United States, which, along with most of the world, has been hit with the Shen Fever.

The fevered become ambulatory husks, mindlessly performing rote, mechanical tasks over and over until they die of starvation … at last, a zombie novel with a grain of believability! Candace Chen hangs on in New York City, going to work as if things are normal, as the city slowly unwinds and the infrastructure collapses, then joins a small group of survivors making its way to a promised refuge outside of Chicago, foraging for food, clothing, and gasoline on the way.

Candace’s inner narrative jumps from past to present and back again. A whole Candace emerges over the course of the novel, along with a chilling picture of life in a wholly capitalistic society on the brink of … and then after … collapse.

As a condemnation of consumerism, “Severance” is devastating. Candace is her immigrant mother’s daughter in her fixation on brand name goods, ironically now surrounded by them, free for the taking and utterly worthless. In a few scenes near the end, Candace (and even her ghostly mother) grow and begin seeking something more important than mere survival. Nowhere are these larger messages made explicit or didactic … they are organic to the novel and Candace’s own perception of things and events, and thus very effective.

“Severance” swallowed me whole. I loved it. 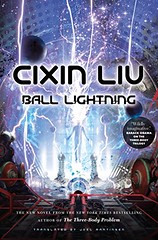 Not really new; “Ball Lightning” was first published in China in 2005, and is regarded by the author as a precursor to his later Three-Body Trilogy (“The Three-Body Problem,” “The Dark Forest,” “Death’s End”). I was blown away by Three-Body, which tackled fundamental questions of science fiction and alien contact; I was intrigued and pleased with “Ball Lightning” … which is to say fascinated but not blown away.

Cixin Liu’s scope in this earlier work is more limited, centering on development of ball lightning weaponry by the Chinese People’s Army, but there is what I took at first to be a supernatural element weaving in and out of the story (hints that people killed by ball lightning might continue to exist on some other plane), later explained by quantum theory but spooky nonetheless.

The first few times this element pops up, Cixin Liu plays it straight by presenting it as fact, without speculation, which I appreciated: I’d rather have my own Holy Shit! reaction than have the author tell me that’s how I should be reacting. This element of “Ball Lightning” becomes more central to the story in the final chapters, more than making up for what I thought was a slow beginning. Without this spooky element, “Ball Lightning” would be fairly pedestrian sci fi … I’ll stick my neck out and say speculating about ball lightning weapons in the 21st Century is akin to foreseeing the invention of the machine gun a decade or so before it appeared on the battlefield; science fiction yes, but not very.

The characters in “Ball Lightning” are strong and memorable, particularly Lin Yung, the female PLA officer who is the Captain Ahab of this tale (Chen, of course, is Ishmael). But I’m getting carried away. “Ball Lightning” starts slow but builds to a solid science fiction climax, and will no doubt be widely seen as a classic of the genre, taking its place alongside the Three-Body Trilogy.

I took the trouble to track down and read “Summit Fever” because I know two of the climbers who were on the expedition. I know them, that is, in present life; the adventures detailed in this book took place decades before we met.

The book is a narrative of a mountain-climbing expedition to the summit of Muztagh Tower, the “Matterhorn of the Himalayas.” The expedition was privately funded and led by experienced British and Scottish climbers. They were joined by three Americans, a couple and a third woman, who had basically paid to be guided to the summit by the experienced climbers. My friends are Burt and Donna, the American couple described in “Summit Fever.”

“Summit Fever” predates Jon Krakauer’s “Into Thin Air” by eleven years, but is essentially similar. Both books were written by published authors who had been invited along to chronicle ambitious mountain-climbing expeditions. Both are gripping edge-of-the-seat narratives of perilous adventure, filled with insights into the world and minds of professional and world-class amateur mountain climbers. Both offer naked, frank appraisals of the climbers … at their best and worst.

Krakauer includes a long afterword to “Into Thin Air” detailing attacks by surviving members of the expedition on the veracity of his first-hand account of a harrowing 1996 Everest attempt that killed eight climbers. Greig does not, and there the two books differ.

The three Americans dropped out of the Muztagh Tower expedition early. The third woman turned back after the expedition ran out of money to pay the necessary porters. My friends Burt and Donna made it to base camp but had to helicopter out when Burt injured his leg. The core climbers invited Donna to continue on with them but she elected to go back down with Burt.

Greig appears to have taken an instant disliking to “the Americans,” Burt in particular, and does not attempt to understand them or what may have been their take on events, as Krakauer did for the surviving climbers of the 1996 Everest expedition. The Burt depicted in “Summit Fever” is a quite different man than the one I know. He comes across, in Greig’s telling, as dislikable (Donna, on the other hand, wins him over).

I will be reluctant to ask my friends about their climb, and Greig’s book, when I see them again. I feel as if I’ve pried into their medicine cabinet, and maybe I won’t ask. I know, too, that I’d have come across even more poorly in Grieg’s telling … for I never would have made it as far as Burt and Donna did.

“Summit Fever” is apparently out of print; I was able to get a well-used paperback copy through an interlibrary loan request. 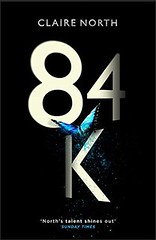 I read and quite liked an earlier Claire North science fiction/fantasy novel, “The First Fifteen Lives of Harry August,” so looked forward to reading “84K.” It opened strong, though I had a hard time with North’s narrative technique.

Her dystopian near-future Great Britain, a state with only a vestigial government, run almost wholly by a giant corporate conglomerate, is well thought out and believable, as is the system of individual indemnity, whereby citizens are essentially turned into wage & debt slaves, with more severe levels of slavery for those farther down the income scale.

Back to the narrative technique. Some reviewers seem to like it. It drove me crazy. People would be thinking or

Sure, a lot of us think like that. Some of us (those of us who can’t hold jobs, I imagine) even talk like that. But ALL the main characters? Not just Theo, but Neila and Dani too? I had to readjust my thinking: it wasn’t Theo or Dani drifting away mid-sentence, it was Claire North, acting as omniscient narrator. But if was her, why then did other characters think and speak in complete, coherent sentences and paragraphs? Why did just some … the most important some … characters dither and

Claire North’s narrative technique quickly became the signature of this novel, in my opinion detracting from what otherwise would have been a solid dystopian story of individual resistance and eventual triumph.

One last thought, and one that will precisely date the time I wrote this review: the corporate bully boys Peter and Simon, Theo’s enemies from his days at Oxford, now running the country and busily killing off patties whose debts exceed their ability to pay them off, the men who killed Theo’s ex-girlfriend, put me in mind of the private school, Yale & Harvard-educated