No, not bicycles or motorcycles . . . I’m thinking of a different kind of cycle this time, as in:

noun: a complete alteration in which a phenomenon attains a maximum and minimum value, returning to a final value equal to the original one (source: dictionary.com)

When I entered the F-15 training program in the summer of 1978 the aircraft had been in service only a couple of years, and its Pratt & Whitney F100 engines were still rigged to produce their full design thrust of around 25,000 pounds each.  But in early 1979, shortly after I began flying the jet operationally, the USAF directed unit maintenance personnel to lower the wicks; i.e., to detune the engines to operate at slightly lower maximum temperatures, producing slightly less thrust.

We learned that Pratt & Whitney had designed the F100 engine to operate over a certain number of temperature cycles, each cycle being one run from idle power (cool) to full power (hot) and back again.  USAF design specs for the engine were based on interceptor-style operation: you’d advance the throttles to 100% on take off, fly for about an hour with the throttles set at or near 100%, and then pull the throttles back to idle at landing.

But that’s not how we flew the F-15.  Our mission was air-to-air, and when we practiced dogfighting, we might chop the throttles to idle and slam them back to full power over and over during a single flight.  So instead of putting one temperature cycle on the engines during a flight, we might put on 20 to 30 cycles … way more than the USAF and the manufacturer ever envisioned.

Detuning the engines didn’t reduce the number of temperature cycles we put on the engines, but it did result in a lower maximum temperature per cycle, reducing stress on the engines, and we pilots had to hope it helped keep engines operating longer, because we hated even the most marginal loss of thrust.

So what?  Aren’t pressurized aircraft hulls built to take repeated cycles?  Yes, but how many cycles?  Flex a piece of metal enough times and it starts to weaken and crack.  Where will the weakness start?  Typically at a rivet hole.

In 1954 the British Overseas Airways Corporation was flying the original jet-set aircraft, the de Havilland Comet.  Two times that year, Comets crashed into the Mediterranean off the coast of Italy.  During a ground-breaking and still widely-studied investigation, the cause was found to be metal fatigue … small cracks at rivet holes resulting in sudden pressure hull ruptures at high altitude. 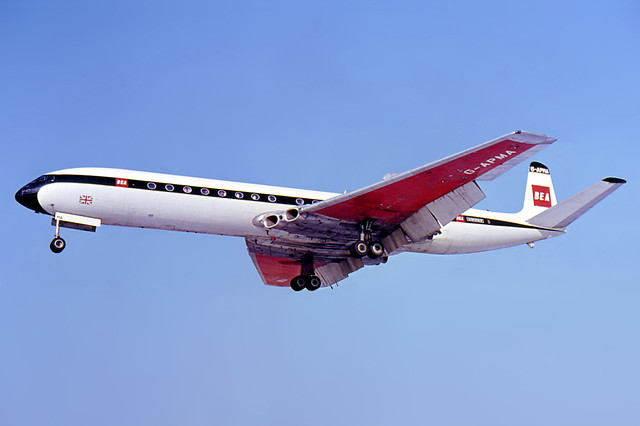 This accident report summary from the first of the 1954 accidents reads as if it were written yesterday.  I don’t know about you, but it sends chills up and down my spine:

Comet G-ALYP left Rome-Ciampino Airport (CIA) at 09:31 UTC on a flight to London. After taking off the aircraft was in touch with Ciampino control tower by radio telephone and from time to time reported its position. These reports indicated that the flight was proceeding according to the B.O.A.C. flight plan and the last of them, which was received at 09:50, said that the aircraft was over the Orbetello Beacon. The Captain of another B.O.A.C. aircraft, Argonaut G-ALHJ, gave evidence of communications which passed between him and G-ALYP. The last such message received by the Argonaut began ” George How Jig from George Yoke Peter did you get my ” and then broke off. At that time, approximately 09:51, the aircraft was probably approaching a height of 27,000 feet. The Comet descended and crashed into the sea off the Island of Elba.

Initial examination and reconstruction of the wreckage of G-ALYP revealed several signs of inflight break-up. Shreds of cabin carpet were found trapped in the remains of the Comet’s tail section; The imprint of a coin was found on a fuselage panel from the rear of the aircraft; and Smears and scoring on the rear fuselage were tested and found to be consistent to the paint applied to the passenger seats of the Comet.

When most of the wreckage was recovered, investigators found that fractures started on the roof, a window then smashed into the back elevators, the back fuselage then tore away, the outer wing structure fell, then the outer wing tips and finally the cockpit broke away and fuel from the wings set the debris on fire.

To find out what caused the first failure, BOAC donated G-ALYU for testing. The airframe was put in a huge water tank, the tank was filled, and water was pumped into the plane to simulate flight conditions. After the equivalent of only 3,000 flights investigators at the Royal Aircraft Establishment (RAE) were able to conclude that the crash had been due to failure of the pressure cabin at the forward ADF window in the roof. This ‘window’ was in fact one of two apertures for the aerials of an electronic navigation system in which opaque fibreglass panels took the place of the window ‘glass.’ The failure was a result of metal fatigue caused by the repeated pressurisation and de-pressurisation of the aircraft cabin. Another worrying fact was that the supports around the windows were only riveted not glued, as the original specifications for the aircraft had called for. The problem was exacerbated by the punch rivet construction technique employed. Unlike drill riveting, the imperfect nature of the hole created by punch riveting may cause the start of fatigue cracks around the rivet.

The Comet’s pressure cabin had been designed to a safety factor comfortably in excess of that required by British Civil Airworthiness Requirements (2.5x P as opposed to the requirement of 1.33x P and an ultimate load of 2x P, P being the cabin ‘Proof’ pressure) and the accident caused a revision in the estimates of the safe loading strength requirements of airliner pressure cabins.

What did aircraft designers, manufacturers, and operators learn from the 1954 Comet crashes?  Plenty.  We know all about pressurization cycles now … or so we thought.  In fact, Boeing engineers say they built the 737 fuselage to last for “at least 60,000 pressurization cycles.”  The Southwest 737 that failed last Friday had accumulated just 39,000 cycles.  Clearly, we don’t know quite as much as we thought we did.

Here are just a few notable pressurization cycle accidents from recent years, including a Southwest Airlines 737 pressurization hull failure that occurred less than a year before last Friday’s failure:

Cheered up yet?  Good, go fly … it’s still far and away the safest way to get from one place to another!