Late one evening toward the end of March, a teenager picked up a double-barreled shotgun, walked into the forest, put the gun to someone else’s forehead, and pulled the trigger.

This is the story of how we got there. 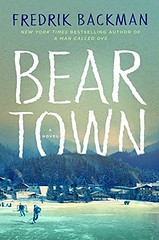 From Wikipedia: “‘Beartown’ (original title in Swedish: ‘Björnstad’) … centers on a declining youth hockey team in a small town. The story follows the events leading up to the rape of 15-year-old girl Maya Andersson by the star junior hockey player Kevin Erdahl, and the consequences for Maya and Kevin, the players, their families, friends, and the community which has a long-standing reputation as a hockey town.”

In October 2018, “Beartown” was challenged in North Carolina’s Rockingham County School District, where it had been assigned in a high school honors English class. A parent complained that its subject matter was vulgar, graphic, and “just unnecessary.” District officials pulled the book from the reading list.

In September 2022, a teacher at at Northview High School in Escambia County, Florida included “Beartown” on a list of over 100 books she said contain explicit sexual content, graphic language, themes, vulgarity, and “political pushes,” demanding the school board evaluate whether the books should remain on school library shelves. “Beartown,” she complained, “has the f-word 83 times,” and “also mentions having sex with animals.”

As a result of these two reported incidents, “Beartown” is now on several lists of targeted books circulated by library and school board meeting protesters, including this one, which warns parents of the following trigger topics to be found in its pages:

And goes on to list two additional objectionable items, rarely spoken of aloud by book banners:

Huh. They left out smoking dope and stealing mopeds. Surprised they missed those.

But yeah, every one of these triggers is in “Beartown,” including sex with animals. As is invariably the case when the torch & pitchfork brigade makes claims about bestiality, it consists of a single sentence, in this case a crude locker room joke shared by teenaged boys. It involves members of a rival team and a seal.

One of the book banners’ favorite tactics is to pick curse words and trigger topics out of context and wave them about at school board meetings. “Beartown” repeats the f-word 83 times? The amount of time we spend on the ice and in the locker room with the Beartown boys’ hockey team, I’m surprised it’s not 83 million times! This is a book about hockey, for god’s sake. A sport played by boys and men wherever there’s snow and ice.* Boys and men who curse and tell crude jokes.

I wasn’t certain I’d be able to get through a novel with so much hockey in it, so averse to team sports am I, but I devoured every page. Curse words, AM radio red flag topics, and book banning aside, “Beartown” is one of those novels that spans the gap between young adult and adult fiction. The primary characters are high schoolers, but there’s a supporting cast of adults too, as well-developed and central to the story as the kids, every character dealing with the kinds of life issues that first confront us, then consume us, from our teen years and on through adulthood. Loyalty, compromise, duty, trust, friendship, betrayal … and yes, sex.

If parents think their 15- and 16-year-olds aren’t ready for issues like these, they don’t know their kids at all. I’m willing to bet the parents who worry so over vulgar, graphic, and “just unnecessary” subject matter are the same ones who encourage their sons and daughters to play sports and excel at them, knowing damn well from their own school days what locker rooms are like.

To the pinheaded Florida teacher who wants to ban “Beartown” for mentioning sex with animals, well so does the fairy tale about the girl and the frog prince, and I don’t hear you trying to stir up the mob about the Brothers Grimm!

*I can’t read Swedish, so don’t know whether to credit Fredrik Backman, the author, or Neil Smith, the translator, but the setting and people in “Beartown” feel so everyday, so relatable, that until halfway through the novel I thought it was set in some hockey-mad town in northern Michigan or Wisconsin!