Tummy Troubles (Not Mine) 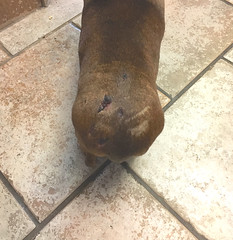 Three years ago our dachshund Maxie was attacked in our back yard by a bird of prey (it happened at night, so probably an owl). That’s a photo of the talon marks and puncture wounds on her backside. Maxie acted like it was no big deal and healed up nicely, but we stopped letting our dogs out at night.

We know Mister B, wise with age and experience, will run inside at the first hint of danger. He’s not the issue. Maxie either, after the attack, but she’s gone now (RIP, sweet girl). It’s the new pups, Fritzi and Lulu, who don’t inspire confidence. They run toward danger, not away from it. So we put the slider in the doggie door before we go to bed, locking them in.

It works out okay. All three dogs sleep in bed with us, waking up between four-thirty and five in the morning, when they need to go out. If Fritzi or Lulu feel the need first, they flap their ears. If it’s Mr. B, he’ll vocalize (it sounds like a whine, but it’s how he talks). Either way, they wake us up. Donna gets out of bed to let them out through the bedroom patio door. I go to the kitchen at the other end of the house and open the doggie door. We don’t worry that they’re out so early in the morning — if it isn’t quite light out yet it will be soon. Donna and I go back to bed, and when the dogs are done they come back in through the doggie door in the kitchen. I get up again at six to give them their pills and feed them, and that’s the start of my waking day. Donna usually sleeps in a bit longer.

Donna’s in Michigan with her sisters this week, so I’ve been in charge of the dogs’ overnight arrangements. This morning, after letting them out and padding barefoot to the other end of the house to open the doggie door, I stepped in a puddle of dachshund puke — thank god I didn’t slip in it and fall. Note to self: turn the kitchen lights on first.

Whoever got sick barfed four times, twice in the kitchen and twice in the adjoining family room. Could have been Lulu, could have been Fritzi. Not Mister B, though, because he needs help getting on and off our tall bed and would have woken me up if he had to get down (the other two jump on and off by themselves, using an old ottoman at the foot of the bed as a springboard).

What to do? Soak up the barf with paper towels and go back to bed. At six, as usual, up and at ’em. They all ate breakfast and seemed to be feeling well. At seven we walked. It had rained during the night and everything smelled new and fresh. Polly (one silver lining amid the chaos of her crashing here again) got up a little later and finished cleaning up the mess. I hope that marks the end of an isolated episode.

Here’s the Gang of Three on our outing just now:

If you feel like thanking me for not inflicting photos of the mystery barf on you, maybe you can buy me a cup of coffee!

One thought on “Tummy Troubles (Not Mine)”