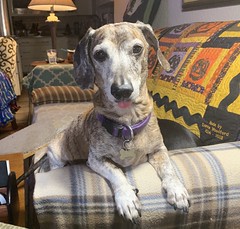 The good news: the vet says Mister B has nearly kicked Valley Fever. In January we were able to cut his daily Flucanozole dosage from 100mg to 50mg. Starting today, he’s down to one 50mg pill every other day, and in two months we can take him off it entirely.

The bad news: the Flucanozole he’s been on since the summer of 2020 has damaged his liver and he has to go on a new med for three months, then get tested again. And the new stuff isn’t cheap. Good thing we love our senior citizen dog!

Almost a month to the day after the guy from Mexico bought my old motorcycle, someone (him? someone else?) rode it over the Bay Bridge from Oakland to San Francisco without paying. Two days later I got a toll invoice from FasTrak®. There’s a grainy black & white photo on the invoice: it’s definitely my old bike, but with a different Arizona license plate.

The state of California thinks I’m still the owner, even though the license plate wasn’t issued to me. Still trying to figure that one out. At the bottom of the mail-in invoice there’s a box you can check if you no longer own the vehicle in question, but you’re supposed to provide proof of sale. Proof? What even is that? Guy came to my house, gave me some money, and rode off on my old motorcycle, title in hand. Is that not how it’s done when people sell old cars and motorcycles? Anyway, I know the buyer rode it straight to the closest DMV office and retitled it, because I checked my DMV online account later that afternoon and the motorcycle was no longer on the list of vehicles registered in my name. I explained all that in a note and sent it back in the return envelope.

So. We’ll see what happens from here. Meanwhile, I’m off to the animal hospital to pick up Mister B’s new liver pills.