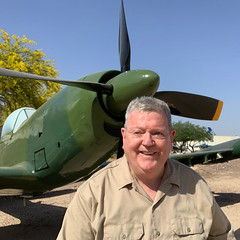 I visited Tucson’s Pima Air and Space Museum this morning. Here I am in front of one the new exhibits, which I’ll get to in a moment.

I was a volunteer docent and tour guide at PASM for nine years, quitting just two weeks before the Coronavirus pandemic forced it to shut it doors in March 2020. It reopened in September 2020 with a skeleton staff, no volunteers, and reduced hours. Things stayed that way through at least September 2021, when I last visited PASM. Now I’m happy to say the museum is returning to normal.

A new normal, that is, with a smaller staff, fewer docents to answer questions, barely any tours, shortened hours, and fewer visitors — but the place is hopping compared to the ghost town it was during the pandemic! 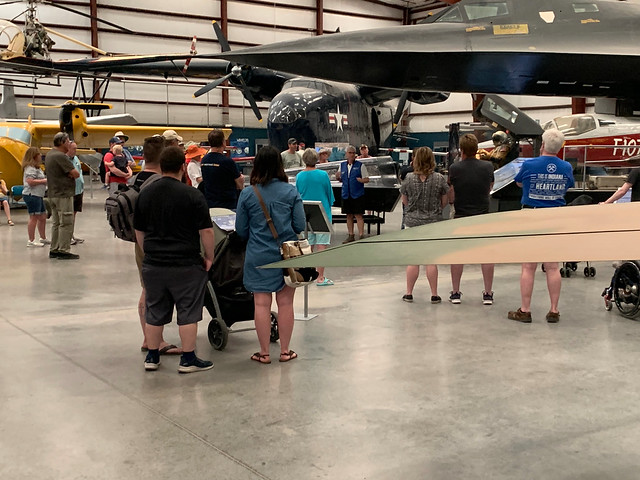 Yes, that’s a volunteer docent you see in the middle of the scrum, delivering a ten-minute talk on the SR-71 Blackbird. It’s good to see volunteers working with the public again after such a long hiatus. Tram tours of the outdoor exhibits are also back on offer (just two a day, vice the six we offered in my day). Still no Boneyard tours, though, and it looks like the USAF has decided it’ll stay that way.

But you want to know if there’s anything new on display. I’m happy to tell you the answer’s yes.

This is super cool: a Piper PA-48 Enforcer, a privately-funded close air support/counterinsurgency aircraft marketed to the USAF and allied air forces in the 1970s. No one ordered it, and only four were built. Its WWII-era P-51 Mustang lineage is obvious, but it was almost totally a new and different aircraft, sharing only a few parts with the original Mustang. It was powered by a Rolls-Royce turbine, and that exhaust is one of the most impressive sights I’ve seen (I mean, if turboprops hung out in locker rooms together, this one would never hide behind a towel).

Next, a Gloster Meteor, the first Allied jet aircraft to see combat during WWII, when the RAF used it to shoot down V-1 Buzz Bombers over England. Meteors flew from the early 1940s into the early 1980s (if 40 years seems long consider the F-15 Eagle, which started flying in the mid-1970s and is still in service nearly 50 years later). PASM’s Meteor is a two-seat radar-equipped night fighter version developed after WWII, and is painted in the colors of the Israeli Air Force, which also operated it.

The highlight of today’s visit was what I spied inside one of the restoration facilities, a small building on the museum grounds designated Hangar Five, informally known to restoration volunteers as Area 51. Check it out: a Messerschmitt Bf 109, a WWII Luftwaffe fighter. I was able to talk to one of the guys working on it, who told me a lot of it is original, and that it was sourced from Germany — in other words, not a replica but the real thing.

But wait, what’s that sitting in front of the Bf 109? OMG, it’s an Me 262, not just another WWII German Messerschmitt fighter but the first jet-powered fighter to enter service anywhere (chew on that, Meteor). I didn’t get any information on the provenance of this aircraft, but I think it’s also an original, one of the three Wikipedia lists as being in the United States. If so, it may belong to another air museum, in which case it’ll be displayed there once it’s restored. If anyone knows more about this aircraft, please read me in.

If you plan to visit Pima Air & Space Museum, I recommend you do it now before the summer heat arrives, or put it off until September or October when it starts to cool down again. In any case, plan to get there right at opening time, 9 AM, so you can stroll around the outdoor exhibits before the heat becomes lethal. It’s also the time of day when you’ll have the place mostly to yourself: here’s a photo of visitor parking I took when I arrived at 9 AM (the lonely white pickup truck is mine): 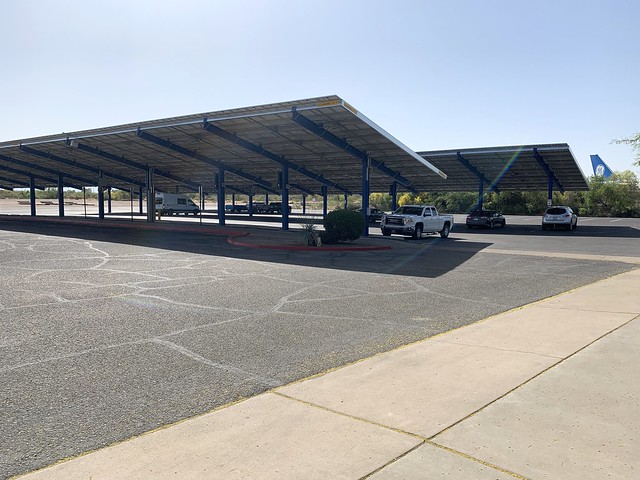 There were maybe twice that many cars in the lot when I left at 10:30 AM. As I said at the beginning, the museum’s in its “new normal” mode: fewer volunteers, fewer tours, fewer visitors. If you’re still trying to maintain social distancing, you’ll have no problem at PASM (I’m happy to report I even saw a few visitors wearing masks today).