All Work and No Pay 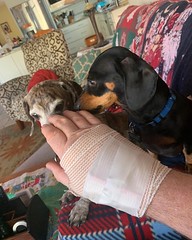 It’s the fourth day after carpal tunnel surgery on my right hand. The wrapping’s off and my fingers, with exercise, are getting supple again, enough at least to type a short blog post.

As expected, the procedure was outpatient. They sedated me through an oxygen mask, not enough to put me under but enough to chase my cares away, while pumping my forearm and hand full of anesthetic and keeping it there with an inflatable tourniquet. I was watching, or trying to, but just when it started to get interesting they put a tent over my head and I didn’t get to see them cutting into my palm and readjusting my nerve ganglions. Anyway, it’s done and I hope the numbness and tingling that’s been affecting my right hand for a year or more will now go away. If not, well, we tried.

Eric Adams, the new mayor of New York City, said an unfortunate thing in a speech the other day: words to the effect that “low skill” workers don’t have the academic skills to sit in corner offices. He singled out cooks, messengers, and Dunkin’ Donuts employees. What’s unfortunate is not only that he, a former cop (a profession known for rejecting applicants who test too smart), believes this sort of classist nonsense, but that so many people in general do, including those who think of themselves as low skill laborers.

In 2005, fresh out of defense contractor work and still in need of income, I applied for a school bus driver position. The job required a commercial driver license. I trained for a month before taking and passing the written and driving tests. That job arguably carried more direct personal responsibility than any other job I’ve had, including flying multi-million-dollar single-seat fighters for the Air Force: the lives and safety of 20-30 kids were in my hands, twice a day, five days a week.

As far as I’m concerned, all work is skilled work, whatever value society puts on it.

One thought on “All Work and No Pay”