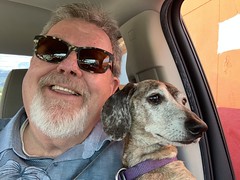 Mister B and I went for a drive yesterday, leaving Fritzi and Lulu behind to watch over the house. Generally our boy’s happy sharing life with his new sisters, but there are days when it’s all just too much and he needs reminding he’s number one in our hearts.

I knew extra love and attention was in order yesterday when he climbed over the armrest of the dog couch and made the short jump to the recliner where I was sitting. Normally Mr. B nests on a pillow at the end of the dog couch closest to my reading chair, where I can reach over and pet him from time to time. Yesterday, though, he wanted all the cuddles. Since co-piloting the truck is his most favorite thing, after half an hour of lap time I cooked up a bullshit errand and we hit the road together. Today everything’s back in balance.

Here we are returning from this morning’s walk, Mr. B taking point as normal.

By the way, I mentioned earlier how hard it was to get Lulu’s harness on right because the black parts of it are so hard to see against Lulu’s black coat. Donna took Lulu’s harness into the sewing room and altered it to make the problem go away (she fixed Fritzi’s as well). Donna’s always coming up with ingenious ways to fix things and make them better. In another life, she’d have been an engineer. Wait. She’s an engineer in this life, minus the degree.

This shit in Texas, with its new vigilante law allowing the worst kind of people anywhere to sue women they accuse of trying to obtain abortions (and anyone they think may have helped them)? Even if they’d put in an exception for rape and incest, it’d still be unspeakably evil. Christian evangelicals? Unspeakable evil is right up their alley, just as it is with the Taliban and religious extremists everywhere.

Within a few days, certainly before the end of the month, every red state will have vigilante anti-abortion laws identical to the one in Texas. Gilead is nigh. It’s already in place — an Islamist version, anyway — in Afghanistan, and it’s coming soon to the Christian Republic of America.

I started feeling squicky around evangelicals and churches when I was 10 or 11. I was raised in the Southern Baptist church, and that’s the age when pastors, parents, and peers start putting pressure on kids to get baptized. Every Sunday morning, a dozen or so kids my age would stand up in the pews and walk down the aisle at the church Mom took us to. I squirmed but kept my seat, first out of shyness but later out of a dawning realization it was all bullshit.

My sisters probably bought my father’s apparent conversion to religion at the end of his life, but I’m firm in the belief he did it to ease the heart of his second wife, Lois, a believer, just as he earlier went along with Mom’s desire to raise her children as Southern Baptists. Had Dad not sat between Mom and me in the pew, she probably would have nudged me to get up and walk down the aisle one of those Sunday mornings. I’d have probably gone. In those days, though, Dad’s agnosticism was obvious — even I was aware of it — and she never did force the issue, at least with me (I’m pretty sure each of my sisters took the walk, all at around the same age, 10 or 11).

I was 14 when I came home from Wednesday youth group at the Southern Baptist church in Laramie, Wyoming, and announced my divorce from church. That was the night the group of teenagers decided to ban my juvenile delinquent friend Jerry from attending our weekly sessions and the pastor went along with it. My aversion to religion had been building for some time, and that was the straw. Dad didn’t say anything and Mom, mercifully, didn’t put up much of a fuss. Over the years, my distrust of evangelicals and disdain for religion — any kind, anywhere — has only grown. As has my respect and love for Mom and Dad, who let me make my own decisions.

We’ve started watching The Chair on Netflix. I was a TA at Sacramento State in 1970 and ’71, and got to know the English Department and its politics pretty well. The Chair is a fun nostalgia trip for me — the problems Sandra Oh deals with, right down to the entrenched tenured Melville scholar — are the same ones my professors grumbled about then. Truly nothing is new under the sun.

I honestly thought the Capitol Police officer who shot Ashli Babbitt was white and in plainclothes. Guess I didn’t pore over the video like the members of the master race did. Anyway, now I’m all like, “Oh, that explains a lot.” Hope he doesn’t pay a price for coming out and saying what needed to be said. 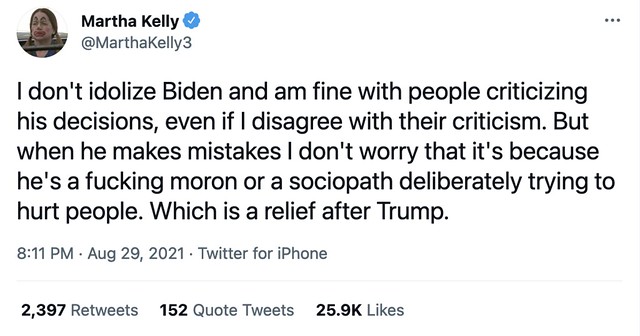