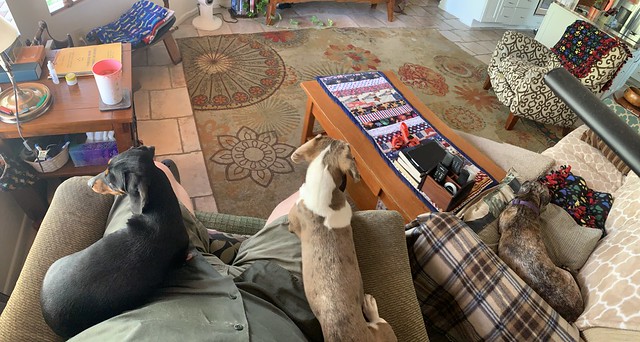 The girls have arrived and are getting used to their new digs. Lulu’s the black & tan; Fritzi’s the piebald. Both are mini dachshunds, both are three years old. They’re not siblings, but they’ve always been together and are inseparable. Mr. B, so far, is adjusting to the mayhem.

Feeding time is going to be interesting: Mr. B’s on the food he’s used to; the new dogs came with a few days’ worth of the food they’re used to. Our plan is to mix Mr. B’s food in with theirs until theirs is gone, so we can get all three on the same diet. We give Mr. B pills with his dinner, and it looks like Lulu too … she may have the beginnings of valley fever (the test results aren’t in yet); for now she gets antibiotic pills with her morning and evening feeding. Fritzi, like Mr. B, wolfs her food; Lulu’s a slow & somewhat picky eater (which means we’re going to have to stand guard over her bowl while she eats lest Mr. B or Fritzi get at it). 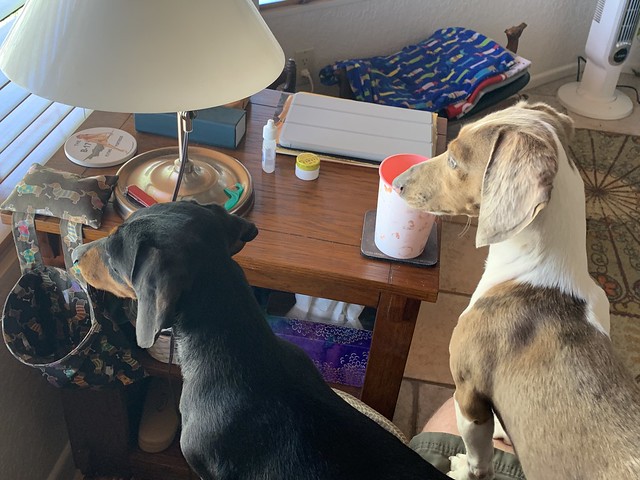 Lulu & Fritzi
The new dogs are learning new names as well. Fritzi is named for Fritzi Ritz, the comic strip flapper who was Nancy’s maiden (yeah, right) aunt; Lulu is named after another comics character, Little Lulu. I guess their full names might as well be Fritzi Ritz and Little Lulu, but we’ll just call them Fritzi and Lulu.

I’m going to the feed store tomorrow to get them collars and ID tags, plus harnesses and leashes. It’ll take both of us to walk all three dogs, another thing we’ll have to get used to.

We are, of course, relieved they’re here at last. I say “at last” like it’s been an ordeal adopting them, but in actuality things went pretty fast. The dogs were abused and neglected by their first human, a 90-year-old man, then placed in an animal shelter. Their second humans were the couple who raised and trained them, then gave them to our care. We’ve promised to make a significant donation to the animal shelter, and of course to give them a good, loving forever home.

And now the fun begins.