I’m a blogger. I love to share, but I’ve learned to hold some things back. You never know who might read what you put on the interwebs. Several years ago I mentioned investigating an F-15 crash in Alaska. Within 24 hours a relative of one of the men who’d died in the crash emailed, asking for details I’m forbidden to disclose. It happened again after I wrote about the death of a Dutch friend some of my squadron-mates and I suspected of sharing info with the Warsaw Pact. Never in a million years would I have thought the man’s nephew–and the Royal Netherlands Army officer who’d investigated the spying allegations–would ever see that post, but they did, and let me know they had.

I’m tempted to write about goings-on in my Tucson neighborhood. Sorely tempted. But I know better than to do it. At least one neighbor knows I have a blog. Blowback would be swift and severe. But man … now I understand why people love to gossip, because I’m sitting on some novel-worthy stories and it’s killing me!

I can share this: our neighborhood 4th of July parade is at 8 AM tomorrow and we’ll be there with Mister B. In past years neighbors gathered for a post-parade brunch at someone’s house. Hosting duties passed from homeowner to homeowner; we were on to host in 2020 but the pandemic put the kibosh to that (not the parade, just the brunch). Knowing some of our neighbors are culture warriors and likely unvaccinated, we passed on hosting this year, but another couple stepped up and it’ll be at their house. They put out word the first post-pandemic 4th of July neighborhood brunch will be BYOF (bring your own food). I hope everyone understands that. Vaccinated or not, I’m not ready to take the risk of catching something from a shared serving spoon or spatula at a buffet table. We plan to at least drop by. Whether we’ll BYOF or not is up for discussion later today.

Donna’s in Phoenix this morning, picking up a sewing machine she dropped off for repairs last Saturday. Polly’s working what the kids call a side hustle, helping prepare a neighbor’s house for showing. Home values are up and people who have ’em are taking advantage of it. We really should, too … but where would we go, and even if we made money on this place, would we make enough to buy another?

So … Transair Flight 810, the Boeing 737-200 cargo jet that ditched in the ocean off Oahu yesterday? The crew reported losing an engine shortly after taking off from Honolulu and were attempting to return to the airport. They transmitted they were about to lose the other engine and apparently did, because otherwise they should have been able to make it back.

Obviously, the accident will be investigated (the NTSB already has a team in place) and I shouldn’t speculate. But just how many things can take out all your engines? Flying through a cloud of volcanic ash? That’ll do it. So will multiple bird strikes, à la Captain Sully and the Miracle on the Hudson. So will contaminated or incorrect fuel, and that too happens sometimes. And so will taking off on empty tanks. Which happens more often than you may think. 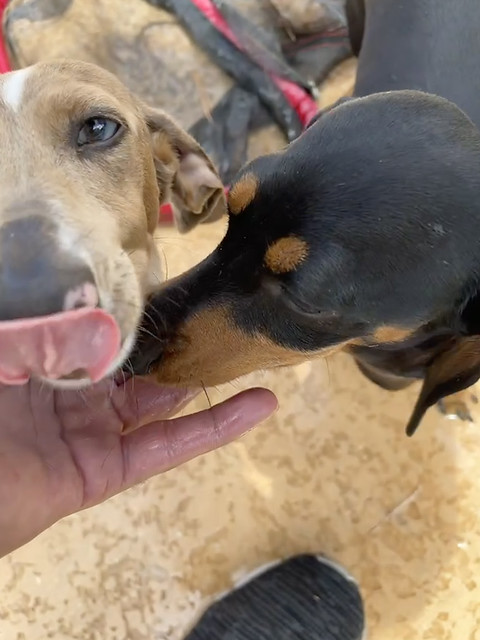 Donna just texted this photo from Phoenix: two 1 ½ year-old female minis in need of a home. I’m game! Let’s hope Donna loses her heart to them … but I dare not get my hopes too high.