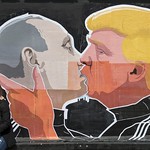 Because of course they are. It’s tribal. Trump embraced Putin and wouldn’t hear a word against him. Biden called Putin out. What side would you expect the deplorables to take?

People say I’m cynical. I am. My sense of humor has always been black, and people, with their stupid venal racist tribal ways, provide an endless supply of entertainment. H.G. Wells had my number: “Cynicism is humor in ill health.”

A Facebook friend compared me to a QAnon believer for saying the Atlanta mass murderer targeted Asian women, that religion likely played a role in making him the worthless asswipe he is, and that the reason local cops seem more concerned with the mental state of the shooter than with the lives and families of the victims is that cops, like the shooter, see the victims as sex workers, a constant target of police harassment.

I dunno. We’ll see, I guess. For now, my cynical side says the Atlanta shooter is exactly who he appears to be, a racist murderer. Sexual addition? Kiss my ever-lovin’ Southern Baptist race-hatin’ porn-obsessin’ Putin-rootin’ ass.

Mister B and I drew a blank on birds this morning. We usually hear them first, then see them, but it was a quiet walk today. Yesterday, though, a series of sharp chirps drew our eyes toward the trees in a neighbor’s yard, and there, high on the side of a saguaro, was a Gila woodpecker. I managed to get my iPhone out in time to record some of its chirping and pecking. The pecking, by the way, is the drum beat of many a morning walk with Mister B. We wouldn’t have even bothered to look yesterday if that’s all we heard … the song’s what got our attention.

When I looked at the videos later I saw the woodpecker’s mate land on top of the saguaro … you can see it briefly in the second video if you’re looking for it. For once, I wish I’d have been holding my phone the way they say you shouldn’t when recording video … vertically.

Both of our children were born in March: Gregory on the 10th, Polly on the 16th. A cake for each, and a shopping trip with Mom for Polly. We’ll take Gregory shopping when we visit later in April (probably with me, to the nearest motorcycle shop). It’s starting to look like our whole family, including the younger ones, will be vaccinated by then, hooray!

I heard from a San Diego hashing friend that Legover died after contracting the coronavirus. Lee became a friend of ours when we lived in Las Vegas, visiting and staying with us several times there and later in Tucson. She was going through rough times during the years we were close to her and life didn’t get much better for her afterward, but I was relieved to hear from our San Diego contact that a couple of friends were there to support her right up to the end. Bless her heart.

I also want to say S&M&M&M’s name, because it’s important to remember friends taken from us by covid. We first met Carmen, several years back, at a Tucson hash. Her smile made a lasting impression on us both. She was one of the most open and friendly people in our circle of friends, just a genuinely good person, and we were devastated to hear of her death.