On Inauguration day, the manager of a gas station in Prescott, Arizona, displays her economic anxiety for all to see:

A driver passing by stops to take photos. The manager comes out to welcome her:

“She came around the other side of my car, she had a camera, she started taking pictures of my car, my license plate, and then she came around right next to my door and took a picture of me,” Tobin said. “I could see she was yelling at me, and I said, ‘shame on you’ and I said, ‘you’re going to lose a lot of business by putting these signs up.’ And I think she screamed something horrible, and then I just drove off.”

The driver’s photos go viral. The owner of the gas station loses his U-Haul rental franchise. The manager loses her job.

I don’t think the ex-manager will be out of work long. This being Prescott, they’ll probably hold a snap election and make her the new mayor. Yavapai County, where Prescott is the only city, voted 64% Trump, 35% Biden.

Prescott is the city where, in 2010, as local artists, teachers, and volunteers painted a mural on a school wall, residents driving by rolled down their windows and shouted racial slurs. Where, once the mural was completed, the city council and school board issued orders to “lighten the face” of a child in the painting. I don’t know, but I’m going to guess they meant the kid in the middle. 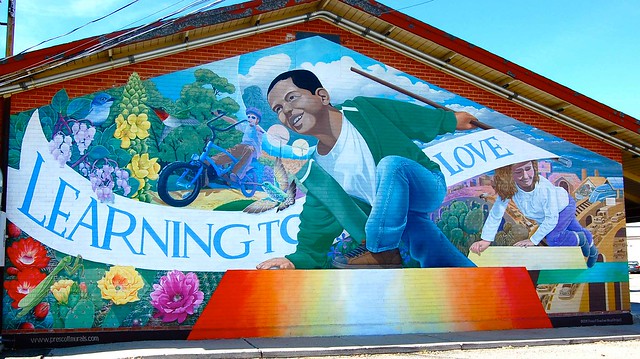 It’s also the city where, in 2011, the city council destroyed a park bench designed and created by a Prescott College student and funded by community members. Because the tile artwork on the bench depicted, in addition to “police badges, animals, and Christian crosses,” these two symbols:

So why do we still have a Republican governor? That is a mystery for the ages.