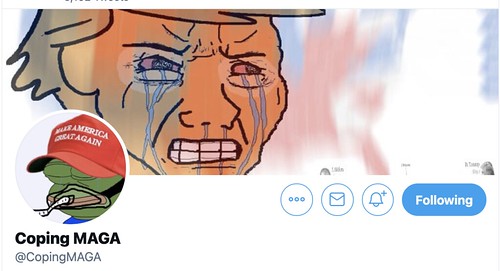 I started following this Twitter account today, struck by the avatar and header graphics. I used to follow a couple of MAGA and QAnon accounts for the window they offered into that upside-down world, but Twitter in its latest housecleaning has given them the boot. This account, @CopingMAGA, tweets content harvested from message boards used by those evicted from Twitter and Facebook, and exposes rather than embraces their views.

What I mean to say about those avatar and header graphics, the scowling face and Pepe the frog, is how they’ve been universally adopted by the MAGA and QAnon types. You see one of these two images appended to a post and you immediately know racist, reactionary, and conspiratorial crap will follow. My question is why people choose to label their messages with graphics that give the game away before the intended audience reads a single word, and moreover choose such ugly, amateurish, grade-school doodles at that?

The media’s up in arms over news that Trump administration officials have lied again, this time by promising to release stockpiles of COVID vaccine when no such stockpiles exist. I’m not that worried about it: the manufacturers have a robust production process and in just a few days we’ll have an administration fully behind the goal of distributing the vaccine and inoculating as many Americans as rapidly as possible. But it’s yet another Trump lie, and the media seems to have finally had enough of that crap, and I guess that’s a good thing even though it comes too late to make a difference.

Remember how, during the first months of the pandemic, FEMA and DHS seized shipments of masks and PPE ordered and paid for by states and hospitals? The hand of Trump was all over it, and I suspected one of the reasons (beyond punishing blue states and rewarding red ones) was to somehow personally profit off PPE stockpiled in government warehouses. Would anyone be the least bit surprised to learn some day Trump and his family are behind the vanished stockpiles of COVID vaccine? That maybe there are refrigerated storage containers in a parking lot at Mar-a-Lago, full of frozen vaccine doses destined for the black market?

This article, if you can stand the reminder, is interesting: The 15 Most Notable Lies of Donald Trump’s Presidency. 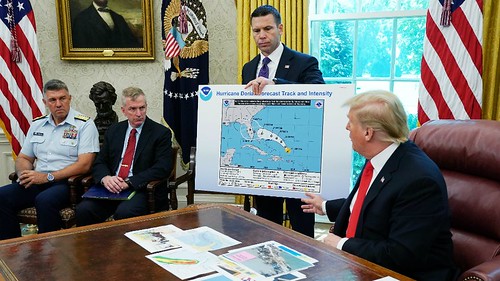 One that leaps out at me is Sharpiegate, about which the author has this to say:

Trump tweeted in 2019 that Alabama was one of the states at greater risk from Hurricane Dorian than had been initially forecast. The federal weather office in Birmingham then tweeted that, actually, Alabama would be unaffected by the storm.

Not great, but fixable fast with a simple White House correction. Trump, however, is so congenitally unwilling to admit error that he embarked on an increasingly farcical campaign to prove that his incorrect Alabama tweet was actually correct, eventually showcasing a hurricane map that was crudely altered with a Sharpie.

The slapstick might have been funny had White House officials not leaped into action behind the scenes to try to pressure federal weather experts into saying he was right and they were wrong. The saga proved that Trump was not some lone liar: he was backed by an entire powerful apparatus willing to fight for his fabrications.

I say it leaps out because I’ve been there. When people say “what the general/CEO/president actually meant was …” after some idiotic policy is announced or some idiotic action taken, they too are lying. Whatever it was, it came straight from the boss. The fish stinks from the head. This is always, without exception, true.

In the 1990s I was chief of flight safety for Pacific Air Forces. One day an F-15 pilot from my former unit at Kadena Air Base in Japan took off and immediately experienced problems. Unable to control his jet, he ejected, and the airplane was destroyed on impact off the end of the runway (I knew the young man, Brent … he and I flew together at Kadena before I transferred to the headquarters job in Honolulu).

PACAF convened a mishap board to investigate the accident. The board quickly focused on maintenance: the loss of control was due to misconnected rods in the pitch roll control assembly, a rare but not unknown problem: two or three other F-15s had been lost to improperly-connected PRCA rods.

As chief of flight safety for the entire command, I supervised mishap investigations in the Pacific theater. When the board finished its work, the members flew to Hickam to brief the commander, General Rutherford … who flatly rejected their findings and recommendations and ordered them to start their investigation over again. He didn’t believe in PRCA failures. He believed young Brent had horsed his jet into the air before attaining flying speed and lost control in the ensuing stall.

The board conducted its investigation a second time and came to the same conclusions. General Rutherford again rejected their report and threatened to replace them with a new board. This created serious, potentially career-ending trouble for the board members: their own four-star commander, who wasn’t answerable to anyone above him, had rejected their work. Twice. Our work, when you come down to it … it didn’t augur well for me either, or my boss, the overall chief of safety.

Recall how the reporter who wrote about Trump’s lies described how, in Sharpiegate, “[Trump] was backed by an entire powerful apparatus willing to fight for his fabrications”? That’s the bit I mean when I say I’ve been there.

After General Rutherford rejected the second report, my boss, who’d been hung out to dry, hung me out to dry as well: he directed me to call my former squadron mate at Kadena and coax him into “remembering” a loss of thrust just before liftoff, or perhaps some distraction that may have caused him to forget to check airspeed before pulling back on the stick, or some other made-up event that would put the blame on him rather than maintenance. In making those calls, I felt forced into betraying every value I believed in. Brent had given hours of testimony to the mishap board. I knew what I’d been directed to get him to do was bullshit and didn’t try to hide my feelings about it. Brent, of course, knew it was bullshit too, and stuck to his guns. The mishap board, twice rejected but knowing they got it right the first time, knew it was bullshit, and weren’t willing to water down their findings. My boss knew what he’d asked me to do was bullshit. With the requisite degree of kowtowing to the general who had our careers in his hands, the board, my boss, and I faced General Rutherford a third time, knowing we were putting our careers in jeopardy. He caved and accepted the findings as written.

One final item, from the Now It Can Be Told files: