I know how to unsubscribe from unwanted campaign email, but how do I block the incessant campaign text messages that make my cell phone ding all day long? Maybe I’ll just turn the damn thing off until November. I hate campaign season, I really do.

Mister B limped after his last walk so we’re going to take it easy a while longer. Otherwise, he seems healthy and perky. I hope he’s not milking it in order to live the life of a pampered house pet. He’s certainly smart enough to have thought of that, though.

The crony Trump installed to cripple the postal service says he’s backing down, but this morning I read he has no intention of replacing the mail sorting equipment he’s already had removed and destroyed, just coincidentally in postal facilities in cities and states that voted for Hillary in 2016. If there were ever a five-alarm fire, this is it, but I fear the damage has already been done in terms of our ability to vote by mail in November.

This is real, by the way:

What the fuck were people thinking when they voted for this two-faced lying sack of shit? Surely they weren’t fooled by this? 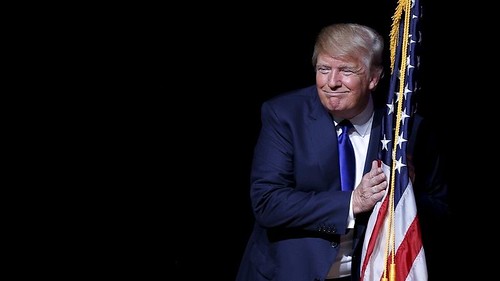 We’ve started tracking how long our mail takes to get where it’s going. I sent a letter to a friend in Virginia on the 12th; he got it on the 15th, which seems about normal. But we mailed a round of credit card payments on the 11th and as of today, the 19th, only one payment’s been credited to our account. Our other checks are still in the you-know-what, it seems.

We’re slowly purging crap we don’t need and will never use again, and gosh there’s a lot of it. I wouldn’t say we’re hoarders, although Marie Kondo might disagree. In the pile we’re working through was a box of wall plaques from my USAF career, and I’m proud to say they all went in the garbage bin this morning. I took the precaution of photographing each item and uploading the results to a Flickr album. Junk, mostly, but memories too. Well, I did save the ceramic squadron plaques my sisters made for us years ago, an original 32nd TFS Wolfhound patch I didn’t know I had, and … damn, it’s hard to get rid of stuff.