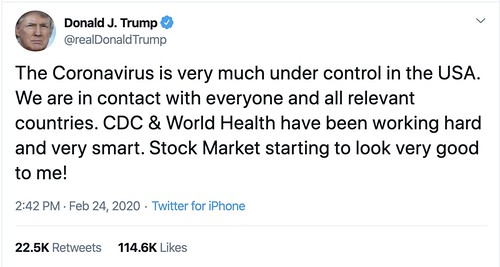 Seriously, though, should we be worried? The mortality rate of Coronavirus is higher than it was for swine flu, but less than half that of SARS. It’s worse than regular seasonal flu, but regular flu is everywhere and kills a lot more people. Avoiding exposure is going to be nearly impossible. Coronavirus is popping up everywhere, and even homebodies like us have to go out in public, if only to get groceries. Honestly, I wasn’t any more worried about Coronavirus than about catching a cold from a random stranger. Until I saw Trump’s tweet. Now I’m terrified.

Our Arizona presidential preference election ballots came in the mail. Arizona’s one of those states with closed primaries: Democrats can’t vote in the Republican primary and vice versa; independents don’t get to vote in either. I think there’s only one Arizona presidential primary this time around; the Republicans aren’t having one. Which means Republicans can switch party registration and vote for the Democratic candidate most likely to lose to Trump in the general election. Genuine Democrats may wind up doing the same thing.

Anyway, Donna and I must each chose a Democratic presidential candidate. There are 18 names on the ballot, but it seems clear at this point the eventual Democratic nominee will be one of these six: Sanders, Biden, Buttigieg, Warren, Klobuchar, or Bloomberg. Donna’s inclined toward Bloomberg, thinking he’s the only one of the lot who can beat Trump, and maybe he is. My candidate, Kamala Harris, dropped out and isn’t on the ballot. I’m down to two: Warren and Klobuchar.

There’ve been three primaries so far and Sanders is generally regarded as the leader, but South Carolina, with a large black voting population, is next and I’m very interested in the outcome, since black voters make up a substantial part of the Democratic base. The Super Tuesday primaries, when 11 states will chose from the Democratic candidates, will be in early March. At least two of those states, California and Texas, have huge Hispanic populations, also an important voting bloc. The Arizona primary isn’t until mid-March; there’ll probably be a clear leader by then.

We can choose to wait and mail in our ballots until after Super Tuesday, or we can make our picks now. The one feels like gaming the system; the other, honest but naive.

I was up early this morning to keep an eye on the dogs after their breakfast. One or both of them pooped inside last week, and we’re trying to make sure they don’t get into the habit. Bad, bad dogs!