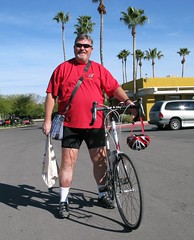 Not long ago I mentioned bicycle hashing on Facebook. A hasher from Austin, Texas — a hashing town if ever there was one — read my comment and added one of his own, saying he wished there was a bash in Austin.

No bash in Austin? Why the heck not?

Does anyone know how long bashing — bicycle hashing — has been around? I don’t, but I know it’s been a while. When I was a visiting hasher in Seattle in 1991, there were a couple of older guys with bad knees who did all the Puget Sound Hash trails on bikes. The Wheelhoppers Bike Hash in Atlanta was founded in 1992, and the Hare of the Dog Bike Hash in San Diego has been around since 1994. Bashing may go back farther than that, and probably does. One thing’s for sure, there are a lot of bashing groups today, and more are starting up all the time. Shoot, Florida even has interbashes . . . now there’s progress!

So look here, Austin hashers, if you want to bash, what’s stopping you? Hashers in Tucson were in the same boat in 2006: a few of us wanted to bash, others were against the whole idea, no one thought it would ever really happen . . . and then two local hashers, Bimbo by Day and Casual Friday, decided to stick their necks out and make it happen. I’m happy to report that we’ve bashed every month since, and that we’re in our fifth year and still going strong.

If there’s no bash in your area but you wish there was one, here are three things Bimbo by Day and Casual Friday did to get things going and guarantee the success of our new bash. Hey, it worked for us here . . . it might work for you there!

Details? Okay, I’ll fill in some details; just realize that some of these are Tucson-specific and may not be quite the right thing for your town or area.

This may not be the universal formula for setting up a bash, but maybe it’ll give wanna-be bashers some ideas and encourage them to go for it. You know, some day there’s going to be an InterAmericas Bash, and I say the sooner the better, so get busy!