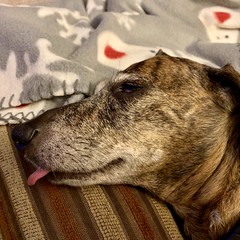 I pop for a high-dollar iPhone so I’ll always have a good camera handy when Mister B nods off with his tongue hanging out, and mere weeks later Apple announces a new model featuring a better camera. Well, I hung onto my old iPhone 6s  … which I must admit had a perfectly adequate camera … for a long time, and expect to keep the one I have now longer yet (I’d better, as much as it cost).  Who needs a wide-angle lens on a cell phone camera anyway?

While writing the previous post on Air Force uniforms, I realized my blog needed a new post category. I’m calling it “scrapbooking,” a category for my compulsive cataloging fetish: posts about cars Donna and I have owned, airplanes I’ve flown, and the like. When I check the blog stats, these posts stand out as popular ones, not just with regular readers but also stray visitors. Now you can find them, grouped together, with a single click.

I ordered a new motorcycle battery from Amazon three years ago and wound up getting two. They billed me for both … apparently I accidentally clicked twice … but after I straightened things out with customer service they let me keep the second battery. Since I’m planning an October cross-country ride through Arizona and parts of Utah, Nevada, and California, I decided to put the second, still new battery in the Goldwing. I’d hate to be halfway between Flagstaff and Cedar City and have the old battery crap out. The new one’s on the charger now; when I finish this post I’ll swap it out with the old one.

Social media friendships are easy to break. Real life ones are a little tougher. I’m kind of in a no-man’s-land between the two with my latest breakup. I met this woman at a hash once. We had a lot in common, liked one another, and have since stayed in touch with messages, first by email and later via Facebook. But since the 2016 election her public Facebook posts, the ones she shares with everyone, have exposed a distinctly MAGA-esque worldview. I didn’t see it in her direct correspondence with me, though, and decided to let it slide. But then her views began to creep into our private exchanges. She recently asked me what I thought of Sean Hannity, and I jokingly replied that I reject anyone who says “Democrat Party.” Except I wasn’t really joking.

She replied with a long and entirely specious diatribe defending the use of, you guessed it, “Democrat Party.” I unfriended her and don’t plan to communicate with her again. She may, and likely does, think it’s over that, but it’s not. It’s over a public message she posted a month ago, wherein she expressed what she described as deeply-held personal beliefs, one of which was “it’s okay to be white.”

Who says that? White supremacists, that’s who. It’s okay to be whoever and whatever you are, including white, but it’s not okay to say “it’s okay to be white.” Those are code words used by the alt-right. Saying “it’s okay to be white” is the equivalent of waving an All Lives Matter sign at a Black Lives Matter demonstration: your meaning is clear to everyone. I knew I had to break our friendship off the day she posted that, but I waffled until last week. You know how I feel about racism. I’ve ended several social media friendships over it, and a few real life friendships as well. I feel bad for a New York minute, and then I’m fine again. Better, in fact, because there’s one less racist in my life.

Don’t say shit like that, white friends. It exposes you. And if you say it anyway, we can’t be friends.

One thought on “Friday (the 13th) Bag o’ Friendship”