The Old Gray Mare, She Ain’t What She Used to Be 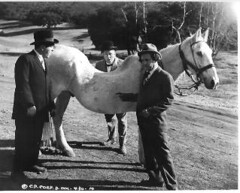 All week the middle of my lower back, the part where you’d put your saddle if I was a horse, has been stiff and sore. I get up like a codger, all bent and twisted, and have to stretch and strain to stand straight. Reaching for anything above shoulder level is an effort. I pop an 800mg ibuprofen in the morning for the soreness, knowing it won’t do anything about the issue itself.

These things always pass, sometimes quickly, sometimes not. I keep telling myself that. Compared to Donna, I have it easy when it comes to back problems.

We signed the contract for our kitchen remodel yesterday. If everything stays on target, it’ll be done the week before Thanksgiving, which is good because our son and his family are coming down to celebrate with us. I remember my military mom’s annual declaration that she’d had enough with preparation and cleanup, that she was taking us to the base chow hall for Thanksgiving. But every year she’d relent and spend all day in the kitchen so we could have Thanksgiving dinner at home. You know what, though? If the timeline on our project slips, one of mom’s children will live to carry out her threat.

Speaking of the military, news broke yesterday of a change in US policy regarding citizenship for overseas-born children of military and government employees posted in other countries. US Citizenship and Immigration Services announced that, starting in October, military and government employee parents of children born outside the US will have to apply for citizenship on behalf of their children. Turns out USCIS meant for this to apply to overseas-born children of immigrant American citizens, or immigrants who have applied for but aren’t yet US citizens. Yesterday everyone was raging about the new rules, me included, because as first reported the new policy would have applied to everyone. Today we’re all like, “Whew, we dodged a bullet.”

Well, wait a minute. What is an immigrant American citizen if not an American citizen? Aren’t we all? And weren’t non-citizens working overseas for the US in military or government service given to understand that if they had a child it would be granted American citizenship?

Everything the Trump administration has done to date regarding immigration and citizenship tells us there’s an end goal. And that end goal is restricting immigration eligibility to white people (preferably English-speaking, preferably Christian), revoking whenever possible the citizenship of non-white immigrants, breaking promises given to non-citizens who agreed to join the military and serve the country in exchange for citizenship, and the end of birthright citizenship for US-born children of non-citizens.

Nor am I fully prepared to accept USCIS assurances that the new rules are benign and simply meant to bring its policy in-line with existing State Department policy. Per one of my most trusted news sources, Wonkette (if you don’t read it, you should):

… a number of foreign policy nerds, immigration attorneys, godless liberals, and knuckle draggers in the military worry that there’s no guarantee Uncle Sam will rubber stamp new citizenship applications, and that [this is] all part of the administration efforts to make it harder for legal permanent residents serving in the military to become US citizens.

Maybe we did dodge a bullet this time, but do you hear that metallic clicking? That’s the firing squad, reloading.

Military leaders haven’t held a press conference in about a year. No surprise then that military and defense news journalists descended en masse on the Pentagon yesterday to hear what Defense Secretary Esper and Chairman of the Joint Chiefs General Dunford had to say. And to ask questions, several of which were about incidents where on-duty military members in uniform have been observed waving “Make America Great Again” banners and wearing MAGA hats at official functions.

“With very few exceptions, they have conducted themselves in a manner very consistent with our ethos and with our values,” General Dunford said. “They have done exactly what we’ve asked them to do, by and large.”

Which is pretty weak tea, in my opinion. There’s no transparency here. The military does not self-report on internal matters. We don’t know if military leadership is doing anything to combat white nationalist and neo-Nazi recruitment of young enlisted troops. We don’t know if military leadership cares about repeated reports of conservative Christian evangelical officers discriminating against Muslim, Jewish, atheist, and openly liberal officers.

We do know, thanks to outside reporting, that military leaders have demonstrated little zeal to stop rampant sexual abuse and rape in the ranks, so we can kind of get an idea how much they’re prepared to do to make military members conduct themselves “in a manner very consistent with our ethos and with our values.”

Yes, of course we have a citizen military, and citizens are allowed to have political opinions. What they are not allowed to do is to air those opinions in uniform or on duty. And yet we have allowed some to do just that. That’s a link to my earlier blog post about Army General Boykin, who, while on active duty during the George W. Bush administration gave speeches in uniform denouncing Islam and promoting Christian fundamentalism. In the same post, I wrote about more recent reports of military members, officer and enlisted, displaying MAGA banners and hats at official functions.

During the early days of the Obama administration, I wrote letters to congressmen, senators, and military leadership demanding the removal of Rush Limbaugh from Armed Forces Radio, because he was openly fomenting rebellion and disrespect for the commander in chief among American troops stationed overseas. I also campaigned, with local air base officials, for a neutral-news-channel-only policy for public area televisions, for exactly the same reason … they always seem to be set to Fox News, an openly partisan propaganda network.

I say this to let readers and friends know I’ve been concerned with creeping evangelism and politicization of the military for some time. I paid attention to yesterday’s Pentagon press conference. I am not reassured. I don’t think military leadership takes the problem seriously, and I don’t think they’re prepared to do much about it beyond giving vague speeches about professionalism. I don’t like what I’m seeing. I’m beginning to wonder how a guy like me … atheist and liberal … would fare in today’s Air Force.

Well, no wonder my back’s giving out, carrying around all these weighty opinions and beliefs!