When I returned from the Death Valley ride earlier this month, I uninstalled the helmet-mounted Bluetooth comm system I’d put in for the trip and sent it back to Amazon for a refund. No, I’m not that big an asshole … the unit was defective. I may get something to replace it, or I may not. Around town I wear a half-helmet with speakers mounted in the ear flaps. With that I can listen to NPR or music while I’m putting around, and that’s good enough for now. The cord that connects the helmet to the motorcycle was frayed, though, and a couple of the wires had broken, so I rode down to J&M Motorcycle Audio yesterday to buy a new one.

J&M is set up like an auto parts store. You ask for what you want from a guy behind a counter. He goes to get it, enters your info into a computer, then hands you your part and a receipt. When he asked my name and I told him, he gave me a look and pulled a magazine out of his inbox. This magazine: 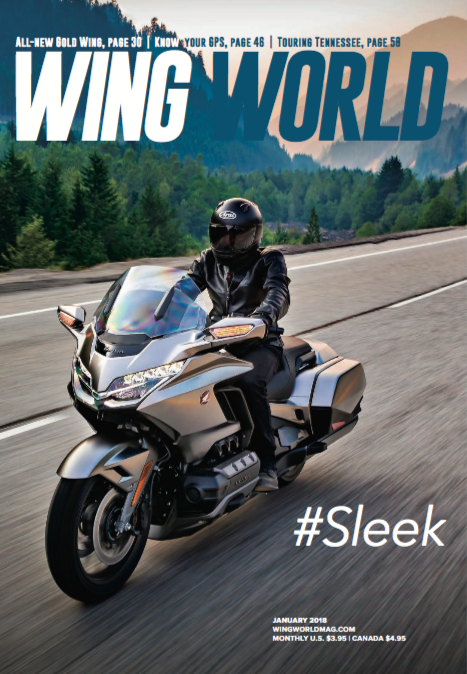 Which he then opened to this page, already marked with a paperclip: 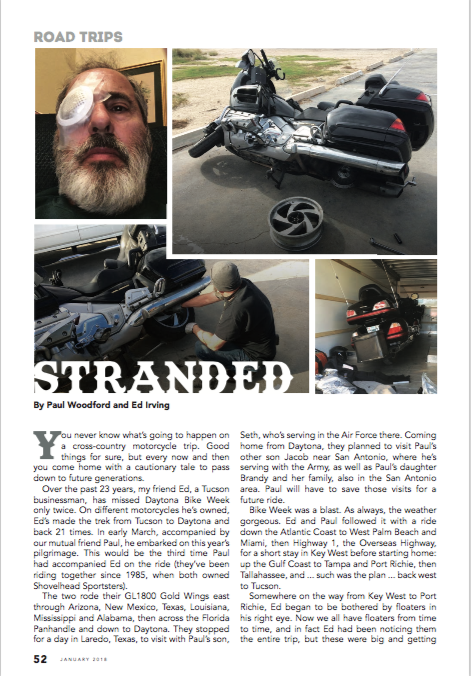 So how about that? People who know nothing about this blog are reading things I’ve written. I submitted two stories to Wing World last fall, each about the motorcycling misadventures of my friend Ed, and they published them both in the January issue. If you’ve been reading this blog for long, you probably already know the stories, because I first posted them here on Paul’s Thing. They’re easier to read on the blog than on a screen grab, so click away:

I have a copy of the magazine itself, but the two photos above should be enough to give you the idea. I’ll just say this: as when I used to write for Harrier Magazine, it’s nice to see my own stuff in an actual glossy-paper magazine.

I spent some time with Ed this afternoon, replacing an engine side cover that blew off on the last leg of our Death Valley ride. I told him about the guy at J&M, and how he said everyone there had read the stories. Ed saw the stories when I first wrote them for this blog, and it was his idea for me to submit them to Wing World. He gets partial credit for the first one, because I could not have written it without his assistance … I wasn’t there, as I was for the second story. Read them and you’ll understand.

About that engine side cover: I’ve lost four of them over the years, all at speeds over 85 mph. They’re held on with plastic pegs which fit into rubber grommets, an iffy proposition. My latest replacement cover, which I bought from a guy on eBay after getting home from the trip, didn’t have foam padding on the inside, and looking back I’m not sure any of the others did. Ed pulled the same cover from his bike and it had a foam lining, so we cut some rubber to fit and tried it that way. The lining seems to help the cover fit more snugly. That should cure the coming-loose problem, but we added a velcro strap as a last-ditch safety, a sort of tether secured to the foot peg mount at the bottom and fastened at the top to a velcro pad glued to the the cover. You can see the strap sticking up from the bottom of the cover, just above the foot peg: 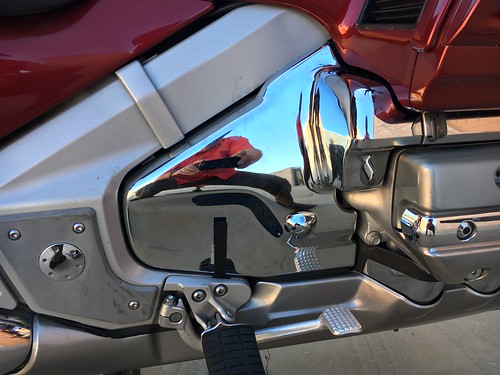 No, it’s not pretty, and if I had a newer bike I might have looked for a more elegant solution, but having bought several replacement covers to date, at prices ranging from 50 to 100 bucks each, I’m going with what’ll work. Or at least what I think will work … I won’t know for sure until the next time I pull the ton!