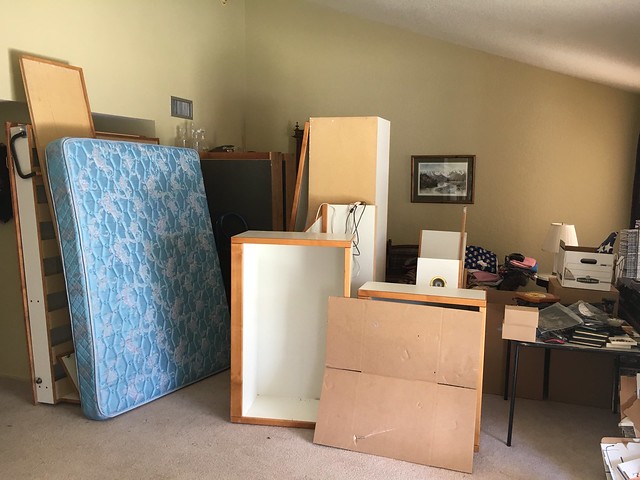 Yesterday, two guys from Off the Wall disassembled and removed the wall unit & Murphy bed we had in the office. That’s it, along with other office stuff, sitting in our living room. Another guy is here now, repairing water-damaged parts of the office wall. Later today they’re taking out the carpet and pad. The only thing still in the office is a desk. With luck they can work around it … that desk is bigger than the door opening, and for the life of me I can’t remember how we got it in the office in the first place.

Tomorrow, when the room is empty and no contractors are on the schedule, Donna and I are going to paint it. Except for the desk, which we’ll cover with a tarp, it’ll be bare walls and a concrete floor. Next Monday they’ll put in the wood laminate flooring; a day or two after that the wall unit & Murphy bed go back in, and the office will be done. Of course it’ll take us another day or two to put all the other stuff back.

This all started a month and a half ago, when I walked into the office in stocking feet and felt them squishing on the carpet: the pipe that drains condensate from the air conditioner was plugged with sludge, and it was draining through the wall onto the office floor. We were lucky we caught it right away; friends didn’t and now they have to live in a hotel for a couple of weeks while contractors take out the sheet rock walls in order to strip black mold from the frame of their house. I think I’m going to set up a yearly visit from the air conditioner guy, mainly so he can flush out that drain pipe. 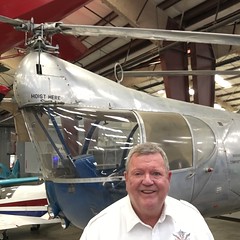 Here’s one of the selfies I took at Pima Air & Space Museum this Monday. I’m standing in front of a McCullough MC-4 helicopter, designed in the late 1940s. If this odd-looking machine jogs your memory, you might just be a fan of 1950s science fiction movies: one appeared in the 1954 film Gog. Yes, the same McCullough company famous for its small two-stroke chainsaw and lawn mower engines.

Most every aircraft type we have at the museum has appeared in one movie or another, but one almost every visitor remembers seeing is our C-82 Packet, the cargo plane from 1965’s Flight of the Phoenix, the original one starring Jimmy Stewart (who was also in 1955’s Strategic Air Command, a movie featuring two other planes at our museum, the B-36 Peacemaker and the B-47 Stratojet.

It’s time I got out of the contractor’s hair. More soon from this beleaguered 21st Century homeowner.