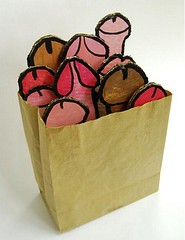 Dear President* Trump: here’s a bag of dicks. I picked ’em myself.

You know, I’m starting to think the smarter course would be to forget about impeachment and just let Trump play the big boss, relying on the courts to clean up his messes and protect institutions and rights. That guy Pence, standing and smirking behind Trump in every Oval Office photo we’ve seen to date? He’s the scary one. He’s the champion of Christian dominionists. He’s smart and disciplined enough to do permanent damage, damage the courts can’t easily undo. And if somehow both Trump and Pence are impeached and removed from office, guess who’s next in line? Paul Ryan, the glassy-eyed granny starver.

Even though every Democrat voted against her, Betsy DeVos has been confirmed as Secretary of Education. Who ever would have thought both Orwell and Huxley would turn out to be wrong, and Mike Judge … the writer, producer, and director of Idiocracy … would turn out to be the prescient one? Not me, even at my most cynical. For once I’m glad I came up in the Baby Boom generation, back when a decent education was available to almost anyone who wanted one. Come to think of it, though, Trump and DeVos are boomers too. How’d they manage to get out of the civics, history, and English classes the rest of us had to take?

Speaking of Idiocracy, check this out.

It really does come down to the smarts versus the stupids, doesn’t it? God help us.

On the personal front, I saw my friend Paul this morning. Paul’s a fellow Goldwing rider and a barber too, and I drop by his shop whenever I start to feel scruffy. After a haircut I feel as frisky as a freshly-bathed dog. Here’s this morning’s before and after:

Where the wimmin at?

An old friend is staying with us this weekend, and other friends are coming for dinner Sunday. I stopped at the butcher shop after my haircut to see what looked good and came home with a big brisket of beef and some of their brats. I’ll dry-rub the brisket Friday and put it back in the fridge to cure. Sunday morning, after the brisket’s in the smoker, I’ll boil the brats in beer, then finish them off in the smoker as well. Hickory, to be sure.

Donna cleaned out the bedroom closets yesterday. Our dogs don’t go in the closets, but our old cat Chewie, who died a few months ago, must have spent a lot of time in them, judging by the clumps of matted fur, dessicated hairballs, and miscellaneous filth she left behind. We miss her, but are not likely to get another cat now that she’s gone.

Writing this post has kept me away from the news for a couple of hours. I dread checking in again. Every time I do, it’s like “What’s he done now?” Hope he likes his bag of dicks.