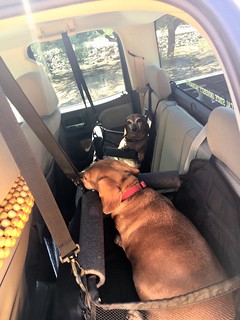 Here are the doggies in their doggie seats, now mounted in the new truck. We’ve taken them on three short in-town excursions and so far they’re happy to ride in the back. As soon as we take a longer trip, I know they’ll want to sit up front again. For now though, it’s a new adventure for them.

I washed the motorcycle and Donna’s car yesterday, and this morning put a new filter on the water line to the fridge. Donna was cleaning the fridge anyway and took the opportunity to scrub down the wall and floor behind it while I had it pulled forward. Spring cleaning at our usual glacial pace.

The motorcycle registration came due and one of the things I did this morning was put the 2017 tag on the license plate. An hour later Donna realized one of our dogs, Schatzi, was missing. She must have wandered into the garage when I was putting the license plate back on the Honda. No big deal: Schatzi was only locked in there for an hour and the temperature was still reasonable, but that garage gets damn hot in the summertime.

A friend encouraged me to listen to the Hamilton soundtrack, now widely available online. I’m about halfway through, digesting two to three songs per session, sometimes at home and sometimes in the car. It’s quite good, and I’ve encouraged a few other friends to give it a listen. Why wasn’t American History like this when we were in school?

My friend and I are not the only ones pushing the soundtrack on others, as you can see from this sampling on Facebook. It was probably inevitable that anti-Hamilton memes would begin to pop up on social media. Why, I wrote one myself this morning. Would you like to see it?

Back to what’s so good about the Hamilton soundtrack: the characters, namely our founding fathers—and King George, whose numbers have a strong Beatles flavour (see what I did there?)—are depicted as contemporaries, and they come to life. They sing about their ambitions, fears, and indiscretions; the experience is akin to reading Sarah Vowell’s historical books and essays. The musical is based on Ron Chernow’s biography Alexander Hamilton, which from its description sounds like something Sarah Vowell might have written, and on the strength of that I’ve put it on my Amazon wish list.

I was going to give you an update on Polly, but we don’t know much. She’s living with a man whom we have never met. We think he’s a DEA agent (her previous boyfriend was Border Patrol). The day after she moved out of our house I drove by the Ace Hardware store where she was working and didn’t see her car. She texted Donna a couple of days later to say she’d quit and was now working as an office manager. Which is good, and closer to what she had been doing in her earlier HR career. We haven’t heard from her since.

The closet in our guest bedroom is still full of her stuff. I expect she’ll come get it sooner or later. Her furniture and kitchen stuff is still in the Border Patrol guy’s house in Ajo … she left him a year and a half ago, so maybe later? I’m not sure why she’s decided to go incommunicado; we were tired of her living here and she was anxious to get back out on her own, but we weren’t fighting or anything. In any case, we have a guest bedroom again, and just in time for an October onslaught of visitors.

That’s the news; do with it what you will.

One thought on “Musical Dog Chairs”