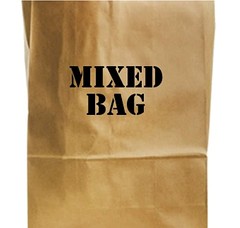 I know, let’s start Monday off with a mixed bag of bloggage and unconnected thoughts.

In a previous post I mentioned driving through Phoenix on Interstate 10. We knew about the I-10 shooter, of course, and had actually considered changing our route through town, but then there was a shooting on the other freeway, I-17, so we said screw it and took our chances on I-10. Half an hour down the road, safely south of Phoenix, we heard they’d arrested a suspect. On Saturday they said the suspect was merely a “person of interest,” not actually under arrest and probably not the shooter. Later that day Sheriff Joe’s boys arrested three teenaged idiots who were committing copycat shootings east of the city, not with firearms but with slingshots and projectiles. The long and short of it is the shooter remains at large. Meanwhile, armed civilians have stationed themselves on the shoulders of the freeway. Let’s hope they don’t hear a backfire and start spraying rounds into rush hour traffic.

I associate this kind of random violence not with terrorism but with plain stupidity, the kind where the afflicted have no impulse control, no ability to consider consequences. I’m not saying there’s more stupidity these days … the stupids have always been with us and always will be. Witness Dylan Roof’s trailer mates, who heard him talking about going to a church to kill people, shrugged, and went back to their shoot-’em-up video games. To be fair, at one point they did hide his gun … but then they gave it back. To an actual terrorist.

And then there’s this guy, the drunk who got on a flight and passed out in his seat, seemingly harmless and haven’t we all been there, etc … except he then woke up, stood up, unzipped, and pissed all over the passengers in the seats ahead of him. I have a suggestion: no drunks on public transportation. Show up drunk, you ain’t getting on board. No plane, train, or bus ride for you. But of course that would mean hiring screeners. TSA could easily handle it at airports, but who would keep drunks off trains and buses?

Well, in my socialist utopia, there’ll be jobs for everyone, and the rule will be you have to work at one to reap the benefits: living wages, affordable housing, free college tuition, nationalized health care. There’s a few thousand new jobs right there, turning away drunks at train and bus stations. The rest of you slackers … most definitely including me … can get busy installing solar panels and rebuilding America’s roads, bridges, and highways.

Speaking of infrastructure, Tucson voters are going to get to vote on whether the city should keep or remove its red light cameras. I ran a red light a few years ago and got one of those photo tickets in the mail. Same thing happened to Donna. Even though we both thought our tickets were unfair, we bit the bullet and went to traffic safety class. In spite of our own experiences, we’re all for red light cameras. We’ve lived in Tucson since late 1997 and in all that time virtually every accident we’ve seen in town was caused by someone running a red light. People know about the cameras now and they don’t run lights nearly as often as they used to. I think there ought to be more cameras, frankly. People talk about freedom and the American way, and that’s just bullshit. If you drive on public roads, you have to obey the rules. That’s not “taking away freedoms.” You’re always free to put up a red light in your own back yard and run it all you want.

Big news! I’m going back to double-edged safety razors. Ordered one from Amazon, along with a 20-pack of stainless steel blades, yesterday. Total price? Less than a four-pack of Gillette Mach 3 replacement cartridges.

On Sunday afternoons our NPR station replays TED talks. The one I listened to yesterday was so overblown I almost changed stations: the speaker, a woman executive in the IT industry, described smartphones as artificial intelligences. Artificial intelligences? Way back in 1995, the Air Force envisioned the development of personal digital assistants, or PDAs, devices that could store huge amounts of information (flight routes, waypoints, approach charts, radio frequencies, etc) and could be plugged into receptacles in cockpits to relieve pilots of some of the more mundane duties of aerial navigation. To my mind, that is what smartphones have become: PDAs, and very good ones. But they’re a long way from achieving consciousness. Rein it in, TED talker lady!

Last week Donna and I went to a big national Hash House Harrier event in Portland, Oregon. We loved seeing friends we used to hash with, but we and our friends are of a certain age, mellower than we once were, less inclined to drink and party, individual islands of calm in a sea of shouting young louts and loutesses. The next national event will be just up the road in Phoenix, in October 2017. We probably won’t go. It’s been fun, but we’ve parted ways with the drinking club side of hashing.

Remember when “You’ve got mail” meant there was something worth reading in your email inbox? Well, some of that old-time AOL excitement came back to me when I opened my inbox and found this email from a reader:

Recently discovered your blog, really enjoy your aviation posts! Although a former Army ground pounder, would have tried the AF except I wasn’t 20/20.  Was in Civil Air Patrol in HS.

Especially like your posts on CAS.  I was at  Grafenwoher Training area in ’77 when the first A-10s flew practice missions there.  I really felt good that they were coming, giving us a better chance if the Red Tide ever came. Course, ultimately we were the tripwire…

Always a positive to find another progressive former military officer on the net… Funny, I always considered myself a moderate to conservative FDR/Truman Anti communist.  The Republican Party has gone so far right it makes me a commie.

I hope the R’s return to sanity, (fat chance).  Guess I’m voting for Bernie this go round.

That’ll keep me going for another year! I actually sent Jack a short answer:

Thanks for the vote of confidence. I’m trying to get my aviation posts out to a wider audience, so it’s great to hear you know about them.

Most of the men I flew with were Colin Powell conservatives. A few were rabid rightwingers; one or two were former hippies like me, although truth be told I’ve always thought of myself as an Eisenhower Republican. Personally I’m very conservative, by which I mean I value hard work, honesty, and moral behavior. When it comes to public policy, I’m way to the left, basically a socialist. I’m keeping an eye on Bernie. He hasn’t been exposed to the naked hostility Hillary has battled for the past 20 years, and frankly I don’t know how he’d hold up under it. Maybe Biden & Warren will give it a shot. We can always hope. And we must absolutely, positively vote!