I’m going to put a few freeway miles on the new truck this morning. The one-year-old but new-to-us truck, that is. The original tires didn’t have a lot of tread left so we had new ones put on. Before the new tires, the alignment seemed off: there was a very slight pull to the right. There’s no pull now, but I’ve only driven 10 miles on the new rubber, that on city streets. I’m going to drive to Benson for breakfast, a 60-mile round trip on I-10. That should tell me whether we need an alignment. I want everything perfect before we leave on our Pacific Northwest road trip later this month. 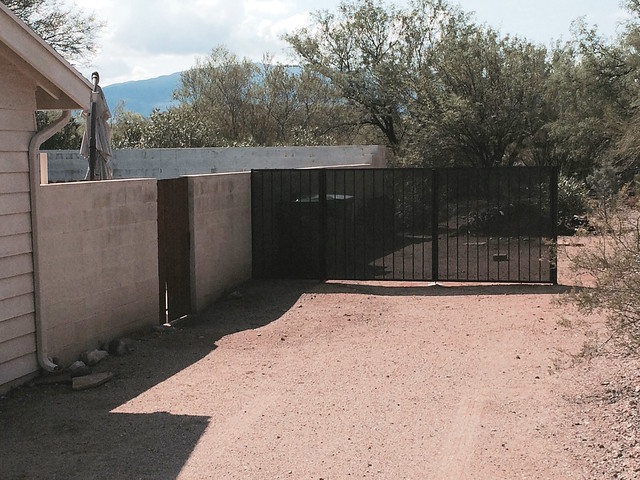 Our neighborhood association has rules about keeping things out of sight. Things like garbage cans, utility trailers, and wood piles, all of which we keep on the dirt driveway alongside the house. Yes, rules are a pain in the ass, but we don’t want to live in a nabe where people park old cars in their front yards. We’ll play along to get along. Sure, it’s a silly gate. You can walk right around one end of it. You can even see through it. But it’ll make the neighbors happy.

I’m officiating at a memorial service in two weeks and have started to put some words together. The service will be in honor of a woman who took her life, and her friends, mostly members of the Hash House Harriers club we belong to, want to give her a good sendoff. The woman’s family was originally going to fly out for the service but I’m told they’re not coming now, so I shouldn’t have to worry too much about people’s sensitivities, suicide being one of those subjects we tend to tiptoe around.

The way I’m leaning now, though, I may not even mention suicide. Originally I was going to say a few words about looking out for one another and being ready to offer support, but the more I learn about depression and suicide, the more I wonder whether those words are even worth saying. Her friends knew she was depressed, and they did offer support, but she kept her demons to herself and once she made the decision to kill herself there was probably nothing anyone could have done to stop her.

Speaking of depression, we have a 40-year-old alcoholic daughter living at home. She’d been living with her boyfriend in a border town a hundred miles from here, but the boyfriend kicked her out and she had no place to go but home. She’s been with us for a month, and although she obeyed house rules and stayed sober for three weeks she’s started drinking again. Yesterday we had a come-to-Jesus and told her to get her ass to AA. She found a group that meets nearby and Donna took her to her first meeting this morning. She’ll have to go every day from now on. AA has meetings all around the clock so people can schedule around their jobs. Having a job is the big plus here, or at least we hope it’ll be. Polly got her old job back, a job she loved, and she starts tomorrow.

Donna will be horrified to find I’m writing about this. Family secrets, etc. But if I’m to write, I have to write honestly. Every family has problems. Our daughter, a brilliant woman, is an alcoholic. It is what it is, and we have to find a way to deal with it.

Meanwhile, my face is a scabby mess. Thursday, the dermatologist burned several pre-cancerous spots on my nose, temples, and cheeks. I really ought to stay home for a few days, but I have to get out. At least I don’t have air museum duty this week. The public will be spared!

Speaking of the air museum, I say enough already with HDR aviation photos! I work with old airplanes, write about them, and post photos of my own to Flickr and my blogs. I like to compare my work to that of others, so I follow aviation photography groups on Flickr, Facebook, and Twitter. Too many photographers over-manipulate their work. Take this HDR photo of a PBY Catalina, for example: 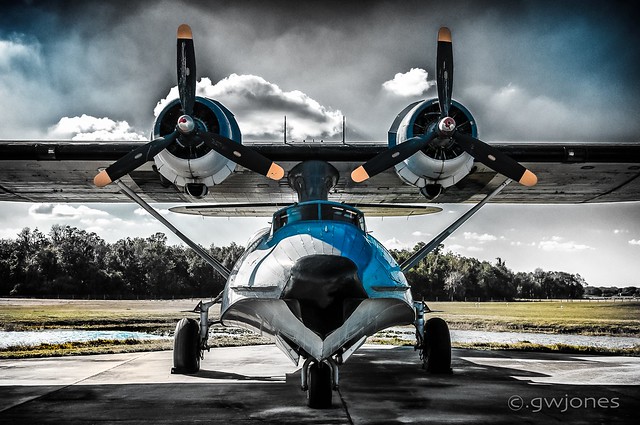 Please. Please take it and make it go away. No doubt the photographer thinks his enhancements are striking and beautiful, but to me this looks like something you’d see at the onset of a migraine attack. It hurts! I don’t want to see the world through alien eyes. I want to see what things really look like.

Yes, I manipulate some of my photos, but not like this. Sometimes what you see and what you photograph are not the same. Our eyes compensate for lightness and shadow but our cameras do not. If the subject is hidden in shadow I use photo editing software to bring it out. If the color is washed out and flat, I nudge exposure or saturation up a notch. I crop. But I don’t do HDR and don’t want to. Ten years from now HDR photos will be a forgotten curiosity. I’d like to speed that along.