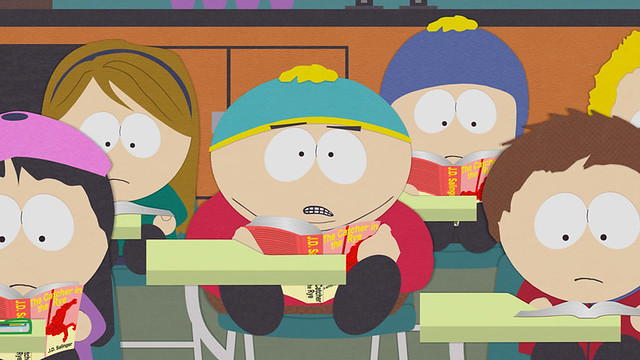 Here’s a Bookriot editorial on the overuse of scare phrases like “book banning.” Wait a minute! I use the phrase, but (I like to think) carefully and with intent. Here’s my rationale, paraphrased from earlier YCRT! posts:

I find I have to explain my use of the word “banned” every so often. My position is that any time someone tries to restrict access to a book in order to prevent people from reading it, that’s banning … even if the ban affects only one school, library, or bookstore, and the book can be found elsewhere.

The US Post Office once officially banned Henry Miller’s Tropic of Cancer. People would argue it wasn’t really banned, because you could always hop on an ocean liner, go to Paris, and buy a copy there.

We hear the same argument today. “So your teacher can’t assign Sherman Alexie’s The Diary of a Part-Time Indian, and it isn’t on the shelves in the school library? So what? You can still get a copy on Amazon, can’t you?”

The problem is school districts in several states have bowed to those who want to control what others read and taken books away to prevent students from reading them. This is book banning.

Merriam-Webster backs me up on my assertion that banning, however localized, is still banning. This is a usage example from M-W’s entry on the word ban: “The school banned that book for many years.”

I rest my case (until next year, when I’ll have to post this again).

In an earlier post I mentioned a scary poll showing increasing public support for book banning. This article goes into more detail on the poll and its results.

Another principal caves to parental complaints, pulling Mark Haddon’s The Curious Incident of the Dog in the Night-Time from a Tallahassee, Florida high school summer reading list, end-running school district policy. Here’s a more in-depth look at the banning of the book in Tallahassee and elsewhere.

This is a little different: residents of Pleasant Grove, Utah asked the city council to remove R-rated movies from the public library, but for now at least the council has decided not to interfere in library decisions. There are only eight R-rated movies in the library’s catalog, and patrons under the age of 18 can’t check them out anyway.

Every now and then I see a Facebook post that isn’t just a photo of someone’s cat: 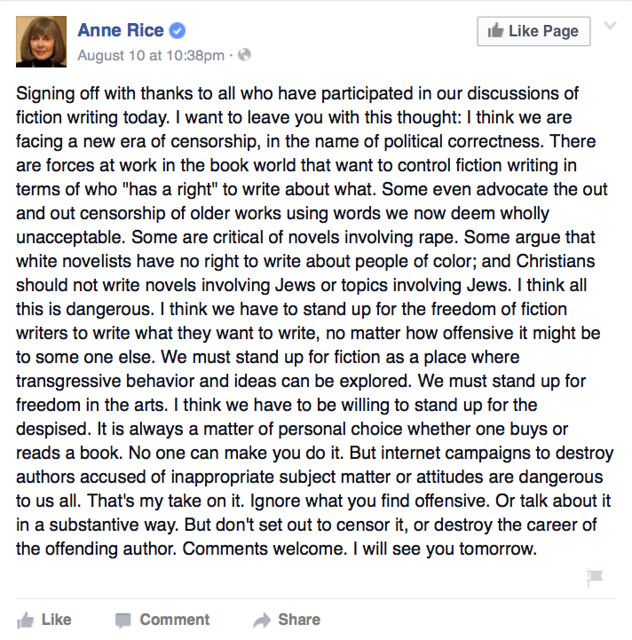 It’s easy to scoff at the college campus trigger warning zealots, but what if administrators use student complaints as an excuse to fire tenured professors they don’t like but can’t get rid of by other means?

I’ve been keeping an eye on a book-banning organization called Safe Libraries, which in addition to attacking books frequently goes after public libraries and the American Library Association with trumped-up charges about librarians encouraging patrons to surf child porn sites on library computers. The charges are false, but Safe Libraries makes a lot of noise, even sending speakers out on the road to rile up communities with scary slide shows about the dangers of local libraries. I think (but admit I don’t know) that Safe Libraries is behind a recent attempt to shut down a public library in Orland Park, Illinois.

Some incoming Duke University freshmen refused to read a summer assignment, Alison Bechdel’s graphic novel Fun Home, citing “deeply-held religious beliefs.” Fine with me, as long as they don’t insist other students can’t read it either. Their protest gives me an excuse to wrap up this installment of YCRT! with my previously-posted review of Fun Home. 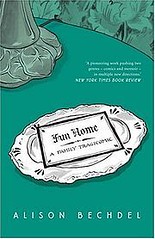 I’ll admit up front to a snobbish attitude toward graphic novels. I was raised to think they were for people who don’t like to read. Still, I’m willing to expand my horizons, and when I learned the theme of this year’s Banned Books Week (September 21-27, 2014) is to be graphic novels, I pressed members of my book club to pick one for our September selection. I went a step further and recommended Alison Bechdel’s Fun Home. We have agreed to read a graphic novel that month; whether it’ll be Fun Home or another selection remains to be seen. I decided to read it anyway, and borrowed a copy from my local library.

You’ve probably heard of the Bechdel Test, a feminist litmus test for movies. To pass the test, a movie must have:

Yes, this is the same Alison Bechdel.

Fun Home is Bechdel’s memoir of her childhood and college years. It’s about her family … her father, mother, and two brothers … and focuses most tightly on her relationship with her father, a troubled man, and her discovery of her own sexuality. This is no comic book; it’s a surprisingly literary and deep self-examination, filled with references and hints that drive you deeper into the text and illustrations. Although it’s a fast read, it’s also a demanding read, not at all what my inner snob was expecting.

Fun Home is touching and extememly personal … I was moved in places, particularly those sections where Bechdel revisits key interactions with her father, showing how her understanding of his complicated character grew as she herself got older. She seems to hold little back; her depiction of a distant relationship with her father doesn’t hide her love for him (I know that’s speculative on my part, but Alison Bechdel made me believe it).

I rarely feel as if I’ve truly shared an author’s humanity, especially not across gaps of gender and sexuality; given that I finished this book knowing only what Alison Bechdel wanted me to know, I was convinced she had shared most of herself with me. I felt connected, and it enriched my appreciation of this book.

When I gather material for new YCRT! columns, I search Google for news articles about book challenges and banning attempts. This is how I first learned of Fun Home, reading articles about attempts to ban or restrict it.

Since its publication in June 2006, would-be censors have repeatedly tried to have Fun Home removed from libraries and school reading lists. The first challenge came just months after publication, in October 2006: residents of Marshall, Missouri tried to have the book removed from the public library. The book was removed but eventually reviewed and reinstated. In 2008 a University of Utah English professor added it to a class reading list. A student objected, and even though the professor gave the student an alternate reading assignment, the student contacted a local organization called “No More Pornography,” which started an online petition calling for the book to be removed from the syllabus (the university stood its ground). Most recently, Fun Home has been challenged in South Carolina, where it was included as a summer reading selection for incoming freshmen at the College of Charleston. Organized religious groups like Focus on the Family and the Family Research Council became involved, and though the college also stood its ground, the South Carolina House of Representatives Ways and Means Committee cut the college’s funding by $52,000 … the cost of the summer reading program … to punish it for selecting Fun Home.

What is it about Fun Home that attracts this kind of attention? The good citizens of Marshall, Missouri characterized it as pornography, expressed concern that it would be read by children, and worried that it would attract seedy elements to the library. Pornography was the label used against the book in Utah. Again in South Carolina, the book’s opponents called it pornography, accusing the book of promoting the “gay and lesbian lifestyle.” One of the state representatives who voted to penalize the college said “This book trampled on freedom of conservatives … teaching with this book, and the pictures, goes too far.” In addition to the budgetary cuts, the legislature required the college to provide alternate books to any student who objects to a reading assignment because of a “religious, moral, or cultural belief.”

Alison Bechdel has described the attempted banning of her book as “a great honor,” describing attacks against it as “part of the whole evolution of the graphic-novel form.” As to claims her work is pornographic, Bechdel points out that pornography is designed to cause sexual arousal, which is not the purpose of her book. Bechdel’s supporters point out that Fun Home has been praised by professional book review journals and is the recipient of several literary awards. As noted, both the University of Utah and the College of Charleston stood by their decisions to retain Fun Home; the provost of the College of Charleston stating that its themes of identity are especially appropriate for college freshmen.

My own reaction? I agree with Bechdel and her defenders: this novel is not only literature but good literature, and while it explores adult themes and sexual identity is it absolutely not pornographic. Yes, Bechdel describes her realization, while in college, that she is lesbian. She describes her growing acceptance of her sexuality and even parts of her sexual life. This is guaranteed to make some readers uncomfortable. As she revisits parts of her earlier life from this new perspective, she discovers her own father’s homosexual past, another potentially uncomfortable subject. And then there are the illustrations depicting Bechdel’s early lesbian experiences:

Some panels are even more graphic, and I can certainly understand why some parents would not want their kids to read this book. I have a hard time, though, seeing where college-aged adults need to be protected from it. Had the censorship attempts in Utah and South Carolina been triggered by the inclusion of Fun Home on a middle or high school reading list, I would not have been particularly surprised. But colleges and universities? Just how grown-up does one have to be to read a book about a lesbian?

I suspect lesbianism … the explicitly sexual drawings in particular … is key to conservative outrage over Fun Home. I thought Bechdel’s story important, especially in an era when we’re increasingly aware that some of our friends, relatives, co-workers, and fellow students are gay. I thought her illustrations frank but not titillating, an essential part of the story. Others, however, see in Bechdel’s story and illustrations an attempt to overturn morality and religion by “promoting the gay and lesbian lifestyle.”

Significant numbers of people, and sadly many parents, believe homosexuality is a conscious choice. Accompanying that belief is the fear that exposing kids to sympathetic depictions of homosexuality, particularly kids who are just beginning to discover their own sexuality, might tempt them to experiment with, or even become, homosexual. Religious conservatives have always gone after books that depict or even mention sex, but books featuring happy, well-adjusted, sympathetic homosexual characters really bring out their wrath. Fun Home is obviously such a book, and we certainly haven’t heard the last about it.

Judy Blume, another author whose books have been banned and suppressed, has this to say to parents who worry about what their kids are reading:

If a child picks up a book and reads something she has a question about, if she can go to her parents, great. Or else they will read right over it. It won’t mean a thing.

I think Ms Blume is on to something. With regard to Fun Home, if the subject of sexual identity makes you uncomfortable, if it is an affront to your religious, moral, or cultural beliefs, don’t read it … just don’t assume your decision should apply to others.