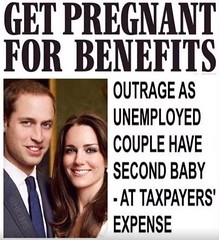 Don’t we wish. The joke is people are outraged (rightly so IMO) over non-contributors getting something for nothing … so long as they’re poor or minorities. When it comes to trust fund babies, celebrities, royals, insanely overpaid CEOs, and the idle heirs of old money, outrage generally turns to acceptance, even admiration. Oh, sure, there are a few of us shouting “eat the rich,” but no one listens.

Resentment is a powerful and basic human emotion, but it’s almost always directed downward toward those we perceive to be beneath us. And who does this benefit? Those at the top, the ones we should resent.

I keep hoping the right kind of demagogic politician will come along, harness our natural resentment, and direct it upwards. Unless this happens, we’ll never see the end of outsourcing jobs and high unemployment. The one percent will take more and more of the pie, leaving us with less and less.

Which is why I’m for Hillary Clinton. Shut up. Yes I am. Elizabeth Warren and Bernie Sanders can’t win against a Republican candidate. Hillary can win and probably will … so long as Democrats don’t throw their votes away on some Ralph Naderish independent candidate.

3 thoughts on “Eat the Rich”